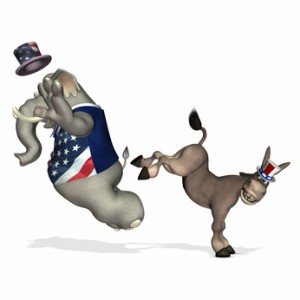 Had it up to your ears with the holier-than-thou morality bombs that cultural conservatives lob over their protectionist fortresses in the culture wars?  Turns out the red states have one less leg to stand on:  new research surfaces stats that show a much stronger tendency for divorce in the states with the highest tendency to dictate correct “family values” to everyone else.

In Which Is the Party of Family Values?, Slate states, “The right likes to portray itself as the guardian of American families, but the reality is that stable-two parent families are more common in ‘the liberal bicoastal, predominantly Democratic places that cultural conservatives love to hate,’ than they are in what Sarah Palin would call the ‘real America’ “.

Turns out those crazy Massachusetts liberals have the lowest divorce rate in the country and six of the seven states with the highest divorce rate in the country voted Dubya/his boss in 2004 and oldie/hottie in 2008.  Seems like marital disaster follows the most preachy.  In their undying quest to focus on the family as early as they can reproduce, red state traditionalists have created the perfect storm.

As Jonathan Rauch in National Journal Magazine puts it, “In red America, families form adults; in blue America, adults form families”.  To unpack that statement, he looks at the ideas put forward by Naomi Cahn and June Carbone (family law professors at George Washington University and the University of Missouri (Kansas City) respectively) in their book Red Families v. Blue Families: Legal Polarization and the Creation of Culture.

The crux of the thinking is this: Conservative cultural and religious crusaders on the right link sex, marriage and procreation in one troublesome lump.  As soon as you emerge from childhood your mentors start making suggestions regarding (obviously) opposite-sex partners which you are encouraged to court for an appropriately short time before tying the knot, banging like goats and producing spawn that, fed the right steak, potatoes and corn bread, will hopefully repeat the cycle.

This all sounds like a great idea as you pass the turkey at Thanksgiving but it makes for a horrible reality when you look at the results of applying cultural standards from a long-gone era to the complexity of the modern cultural landscape.  Liberal or conservative, kids freak; and, in a conservative culture that stresses abstinence over protection, pregnancies occur, especially when you are on the Right side of Roe v. Wade. Back in the day you could afford to get married in-or-right-after-high-school-young because of butterfly love or because someone had gotten knocked up.  Today that is a terrible idea because it is much less possible to bring home bread for two (much less three or four) people on a high school diploma. But tradition rules in red states, early marriages abound and the combined stresses of youth, poverty and offspring often result in divorce.

On the other side of the culture wars are those pesky leftists with their irresponsible sexual mores, over-the-hill singles and baby-killer doctors.  The right sees them as the bane of family stability and values-based living.  Rather than stress sexual abstinence before marriage, the message from these bleeding heart liberals, is: “Have all the nookie you want but whatever you do, stay sheathed and don’t get pregnant and certainly don’t have a child until after college and a stable income.”  Although it flies in the face of traditional morality, according to Cahn and Carbone, this kind of life advice is statistically more likely to achieve the ideal of a stable, two-parent household.

So what to make of all this?  Cahn and Carbone’s statistics seem to say that moral traditionalism has failed in producing stable families.  Should pre-marital sexual abstinence and other conservative values be discarded? Should blue states now take the moral high ground and should Hollywood be allowed to dictate its own morals more than it already does?  As convenient as that would be, Rauch admits, “Whether Cahn and Carbone are right will take time and subsequent scholarship to learn”.  In the meantime a nonpartisan and fairer approach might be to abandon attempts to establish a hierarchy of cultures and instead focus on common ground.  Sexual morality is open to a variety of interpretations but surely protection is a good thing to stress across the board.  Life preparation over early marriage is another idea that makes as much sense in Oklahoma as it does in New York.  And before children come into the picture, invest in a college fund.

40 thoughts on “Why Red, “Family Values” States Lead the US in Divorces”