You’d think I knew better than this… I did, after all, spend six years of my life living near London.

To start our year of “savvy”, global do-gooding, Jammie and I headed out for our first big touristy trip to London yesterday. It was a train wreck.

This is how it all went down, summed up in 5 tips on how not to visit London.

Here goes: DO NOT:

Do it on little sleep

Jet lag is a terrible thing. Since we got to England a few days ago, we’ve been waking up at random early morning / middle-of-the-night hours, not being able to go back to sleep.  Then fatigue has hit like a sledge hammer in the middle of the day. It is seriously frustrating. This said, we headed to London anyway, determined to get the most out of the experience. As the picture proves, I was already yawning on the 1 hour train ride to London. It was downhill from there.

Our first stop was an Indian restaurant with a respectable buffet spread for 6.98 pounds ($11.30). We were hungry so we attacked the buffet like our lives depended on it.

The combination of heavy starches (potatoes, rice, breads), curries and other rich sauces about knocked us out. We staggered out of the restaurant near Euston station in north London already feeling defeated. As we walked past a hotel on the way back to the Underground (tube) station, I sooo wished we were staying there because I was already dying for a nap.  A bad start indeed.

Think you are in a marathon

England is not a cheap place to travel. Our train tickets cost us a combined price of 38 pounds ($62). So we were absolutely determined to get our money’s worth. So much so that we were planning to see as much as physically possible before taking the last train home at 11:50 PM.

This kind of marathon approach would have been exhausting even if we had been sleeping well and lived in London.  In our sleep deprived state and with the added travel time to and from the city, it was torture.  By early evening (around the time the above picture was taken at the world-famous department store, Harrods), I was ready to fall over.  And I knew I still had another 5 hours to go….

Settle for crappy places to nap

There comes a time when you have to take a nap.  For Jammie this coincided with our arrival at one the world’s premier modern art destinations, Tate Modern.

Tate is amazing as it is the most visited modern art gallery in the world.  Instead of standing in awe of the huge, renovated power station that houses Tate, we found Jammie the first warm bench available: in the foyer of the main cafe.

This turned out to be a horrible decision as there was constant foot traffic, the bench was hard and the lighting was anything but conducive to a nice nap.

After her impressively long, 45-minute nap we found several superior sleeping options in various galleries with padded seating.  But by then we had the added pressure of squeezing seven floors of gallery into the hour and a half we had before closing time.  Needless to say that did not happen.  We barely covered sections of the top and bottom floors.

Think you will get out of Hamleys without taking ridiculous pictures 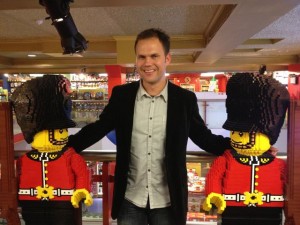 We did not want to leave London without visiting Hamleys, the largest toy store in the world.  This place was amazing.  We went to the flagship branch on Regent Street which gets 5 million visitors a year.

We forgot how tired we where and became kids again, playing with remote controlled cars, looking at random stuffed animals and taking pictures with these awesome Royal Guards.

If I had been under 10 it would have taken forever to get me out of that store.  It was truly amazing.

But it was late and after checking out a few more shops we’d had enough.  We abandoned our plans to take the last train home to my parents’ place and instead took one that left an hour earlier.  We were asleep in no time and it is a minor miracle that we didn’t miss our stop at Bracknell station.

Over to you – have any tips for us as we visit London again next week?  I mean, apart from getting some sleep…:)