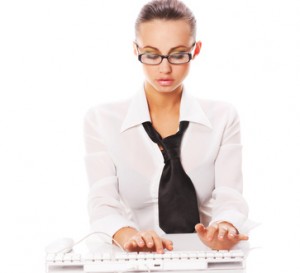 When New Yorker staff writer Michael Specter dubbed Tina Fey “the sex symbol for every man who reads without moving his lips”, he not only described the Sarah Palin-killing 39-year-old comic genius behind 30 Rock, but an entire feminine ideal for some men.  You know what I mean:  hotness defined by both brains and beauty, the late-blooming nerd wearing a “The Show’s Upstairs” T-shirt.  The antithesis of the FHM pinup.  The witty girl with the quirky smile and cute butt.

“…conventional pin-ups have it easy,” says Rohan Joshi on mid-day.com, “the more your neckline plunges, the higher your stock and search results rise, fueled by the fevered keystrokes of a million hormonal teenagers…. Every single beautiful woman I’ve ever seen interviewed in a magazine says they like guys who can make them laugh. The thinking man’s pin-up goes one step further. She makes him laugh. Which explains why my closest friends would take a bullet for me on a normal day, but would gladly put six in me if doing so earned them a date with Tina Fey. She’s gorgeous, she writes for (and presents) Saturday Night Live, she’s got her own uber-funny sitcom (30 Rock), and she found time in the middle of all that to go off and have a baby, and take on Sarah Palin.”

So, is the intellectual’s pinup an even more impossible ideal than a Playboy centerfold?  As Tina Fey is very much taken, what lies on the horizon for men that like their women both cute and brainy?  There is a really fine balance here, because the answer certainly isn’t for women to take on a Clintonesque gravity about them or to adopt what the thedailybeast calls “a castrating nature.”

Touré of the Daily Beast elaborates: “Can a woman be independent, creative, sharp, witty, strong, and self-empowering without making me feel like she wants to be a man? Ann Coulter and Judith Regan could never make the list—they’re sexy, brainy, powerful, but I feel like they secretly want to steal my manhood.”

It would seem that a lot of the qualities that women find sexy in men, are equally on target for what men find sexy in women.  Take Salon’s Sexiest Man Living 2008 for example.  “There’s more to life than pretty boys… Salon picks the men who really drive us mad,” reads the tag.  Included in those that make the listing are Obama – “Calm is sexy… Command is sexy…” and Indian-American Kal Penn of Harold & Kumar go to White Castle – “it’s not just Penn’s soulful good looks that make our knees go weak, it’s his erudition and political awareness.”

These traits, complementing an already attractive man or woman, are a definite turn on and are likely to be around far longer than perfect legs and a healthy bust.  Take it from Joshi:  “The fact that she’s gorgeous is just a lucky roll of the genetic dice. And that right there is the biggest epiphany of them all when it comes to the thinking man’s pin-up. When time cruelly, and inevitably, takes those pin-up-looks away, you’ll realise that it was really never about them at all.”

Is professional success in a female emasculating?  This and more in Part II….

11 thoughts on “The Pencil in a Smart Man’s Pocket, Part I”