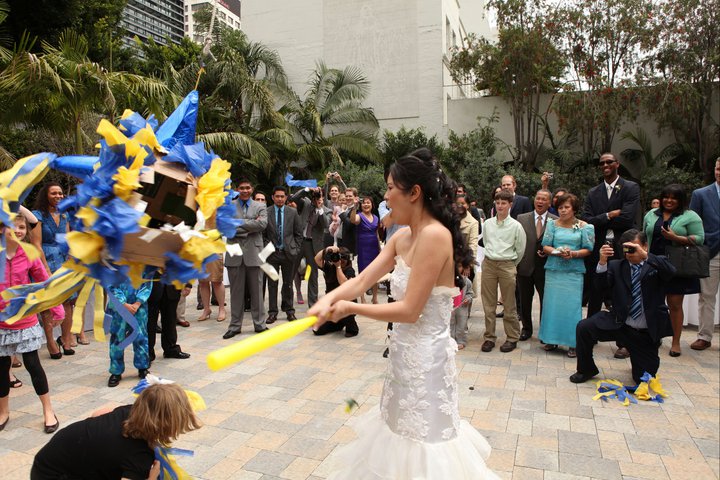 On April 3 I will have been married a year.  My sister is getting married this week.  Neither of us chose Swedes for life-mates.  So we have both done of a lot of work making sure we pull off international weddings right.  Here are the 10 Commandments that have emerged:

1)  Decide on Scale  - This one is on every wedding planning checklist.  Just how big is your wedding going to be?  This is especially critical when you are trying to pull off an international wedding.  If I had married another Swede I would have been looking at a guest list of 100 or less.  In Filipino terms, our 300-strong wedding guest list was still a little conservative.  Discussion over this kind of things can get tense quickly since finances and logistics become major considerations the bigger the wedding gets.

2)  Establish basic DOs and DON’Ts upfront – Cultural preferences and rules may have caused tensions while you were dating.  Expect any drama you experienced to balloon exponentially as soon as the pressure of a wedding date is applied.  Wedding event planning is stressful in and of itself.  The fact that you have to remember cultural rules just adds to the fun.  Here’s a fun one to start off with: Who is going to pay?  In traditional Filipino culture, for example, the groom’s parents pay for the whole shindig.  How’s that going to fly?

3)  Offend people early in the process… not close to the date – What do I mean by this?  Well, obviously I agree that it is best not to offend people at all.  But that is not realistic.  Try to anticipate the sensitive issues and tackle them early on.  I talked to a friend who married a girl from a very different culture.  The two families had dodged some of the big financial conversations for so long that when they became critical right before the wedding the two sides were so angry they could hardly talk to each other.  Don’t procrastinate on conversations just because they are tough!!

4)  Do as much as possible online - My preference is to only have the first save-the-date be on paper and then coordinate the rest of the wedding announcement / logistics online.  We did this and it worked pretty well.  Everyone got a fairly ornate invite which was also magnetic (and we hoped would therefore be stuck to fridges) and then we had everyone register on a site that we paid about $5/month for.  Everyone could register here AND there was a link to registries.  This worked for 95% of guests.  The exceptionally computer illiterate called us and we signed them up ourselves.

5)  Find low hanging fruit – What I mean about this is that there are some easy wins that are easy to get right from the get go.  Does aunty so and so have a huge ego / insatiable appetite for attention?  Tell her immediately that she can own the coordination of the games for the guests between the ceremony and the reception.  (Incidentally, if you opt for a piñata like the one above, pick a plastic bat… kids have a way of getting in range easily (see the above pic) and Jammie has a gruesome story of how an ambulance had to be called at one event she went to.)  This job will give aunty a focus and will feed her ego in a way that will hopefully keep her out of something more critical like speech giving during the reception.

6)  If meeting parents for the first time. – Jammie met my mom for the first time right before the wedding.  They were both nervous about this.  When your parents are thousands of miles away this kind of a scenario is not unusual.  Realize that it WILL be a little awkward and try to make it as smooth as possible by Skyping ahead of time as much as you can.  Go the extra mile in trying to connect with your in-laws.  It is nearly always a great idea.

7)  Pick the right translators – One of my most embarrassing moments was one in which I had to translate a wedding from English to French in real time.  At one point I messed it up so bad that the bride had to intervene and say that I had gotten something wrong.  I wanted to disappear.  Don’t ask me to translate your wedding into French.  It’s best to audition translators ahead of time.  Also, pick translators that will translate into their native tongue.  If, for example they are English but they speak decent Spanish it is fine to ask them to translate Spanish into English.  Don’t have them do the reverse though unless you want some awkward moments.

8)  Use your people right – This one is particularly critical if you or your other half comes from a long-winded culture that is prone to really drawn-out speech making.  If you know that a particular family member (who MUST be given a speaking role in the wedding) is likely to talk for too long, get around it by giving them something like a prayer or a reading.  DO NOT give them an open-ended piece because that will bore and frustrate the crowd and while this may be OK at other occasions, you don’t want that at your wedding.

9)  Stop being so sensitive – Your wedding is your wedding.  It will hopefully only happen once.  The problem with this is that there is so much pressure to get it right that it is easy to get over-sensitive.  It is not uncommon for fights to erupt over foolishness.  Decide ahead of time that, while you can do nothing about how others behave, you can and will control yourself.  Shut off the part of you that is easily offended and hurt by deciding to be Teflon for a while.

10)  Celebrate Chaos – Have some fun with it all.  No matter how well you plan, something will go wrong.  Case in point: the day before my wedding I took my Swedish family to my old neighborhood in Hollywood to grab some frozen yoghurt.  This was definitely NOT the ritzy part of Hollywood and as we were parking a bunch of guys came up to our vehicle asking for money.  This scared certain family members to the point of near hysteria.  I told them to cool it and we drove to a different parking lot instead before grabbing our frozen treats.  Stuff like this WILL happen.  See the humor in it.  And don’t have your wedding in Los Angeles…

12 thoughts on “The 10 Commandments of International Wedding Planning”