I’d never seen anything like it: I’d just landed in Buenos Aires in the summer of 2005 and angry mobs ruled the streets. Every week, huge throngs of protestors marched down major avenues, waving signs and protesting the government. Many carried wooden clubs. You did your best to stay out of their way but sometimes that was impossible.

George Bush was in his second term and was extremely unpopular. I was scared when he paid a visit. Pandemonium broke out. I heard the explosions outside as I stayed indoors and watched the protests on CNN.

Molotov cocktails were hurled at a McDonalds I sometimes frequented. A local Burger King was trashed. It was crazy. I didn’t leave my friend’s apartment where I was hiding until late. When I finally left late at night it looked like Buenos Aires had been attacked. The streets were completely trashed.

This experience and other close calls I’ve had in other countries have left me with some rules of engagement to avoid getting clubbed or otherwise attacked while abroad:

Do whatever you can to not look American

Whether or not you actually are American is beside the point here: try never to look American abroad. This is often a challenge for me because I sound American. But I always stress that I am Swedish. Too many people feel the need to settle scores with Americans. I have had people angrily blurt out out Anti-American sentiment at me. The United States is too involved in global affairs for its citizens to not be affected.  It’s not fair but it is also reality.  BE CAREFUL.

Listen but do not speak

It’s good advice when starting a new job and it is good news when traveling: shut up. Hear people out but resist the temptation to chip in with your two cents. Nobody needs to know your political or other views.  At least not when you are brand new. Your motivation in travel should be to learn, not proselytize.  So do not pack a soap box.

Seek out a a strong source of local intel

Taxi drivers are great intel sources if you want to get the common view on the street. As soon as I step out of a foreign airport and into a cab I start quizzing the drivers on everything from local politics to entertainment and bad parts of town to avoid. (Incidentally, if I am catching a cab late at night, I always also ask them about family because this puts them in a positive mood for the most part and I minimize the risk of kidnapping or being over-charged.). In addition to cab drivers I seek out guidance from friends and from others, like business owners, that have a pulse on common sentiment.  That way I know how to conduct myself respectfully.

In December 1989 my family and I were living in the Philippines during a violent attempted military coup. Rebels swarmed into Manila, shutting down the airport and taking over key parts of the commercial center. Several military bases were captured and rebel airplanes shelled the presidential palace. I heard the bombs exploding on radio broadcasts. Our Swedish relatives were horrified. We, on the other hand, were perfectly fine. Why? Simple – we lived in a tiny town surrounded by jungle and sugar cane an hour and a half away from the action and nothing even remotely dangerous happened to us.

So if you are in a dangerous country, stay out of the hot spots. Rural areas give you an authentic, less commercial experience of a country and have the added side benefit of being peaceful. Be smart.

The better you attitude and ability to learn from locals, the safer you are.  So travel with the right attitude.  Live to learn and discover and experience new things.  If you are willing to grow from exposure to new cultures and different ways of living, people will recognize that and look out for you.  You will be far better equipped for savvy, global do-gooding… 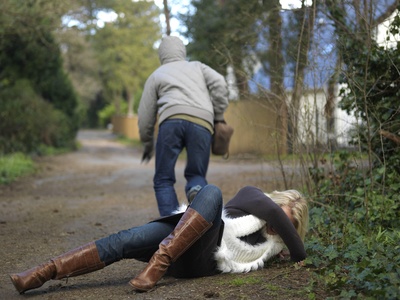 When I was a kid growing up in the Philippines, I grew up petrified. My friend’s dad was kidnapped in Manila by two guy’s posing as police officers. Another friend’s dad was tortured, shot dead and buried in the sugar cane fields a few miles from our first house. Burglars tried to saw through the bars on my bedroom window and only took off when an armed guard on patrol fired a warning shot. Almost every one had a story of either them or someone close being robbed in some way in Manila. To prove how easy it was to be robbed, a friend of ours stuffed his wallet full of paper, put it in his back a pocket and walked through an open-air market. Sure enough, it was gone by stroll’s end.

Needless to say, I developed a heightened sense of caution. To this day I am notoriously redundant about checking and double checking that doors are locked, money is hidden and that I cross the street if anybody suspicious is walking up to me. I am perpetually paranoid because I have seen too many bad things happen to good people. And the bad stuff often happens in unfamiliar environments.

The most valiant attempt at savvy, global do-gooding can easily be ruined if you are robbed the minute you step out of the airport. It takes street smarts of an international variety to stay safe and unrobbed while traveling. The good news is that there are some common sense principles you can digest to enjoy your international do-gooding sans drama. Here are a few things to keep in mind:

You are not special
When you are trying to do some good abroad it is tempting that karma should be on your side. Humans have an optimism bias. We assume things will go well. This is often a good thing. But this kind of optimism also leads to complacency – you flash big dollar bills; bust out an iPad; ask to get dropped off by a fancy hotel… Rookie mistakes that result in people thinking you are rich and you getting held up.

Don’t try to look cool
Whatever you do, don’t “wear” your money when traveling. Don’t be that clueless tourist with the big camera and flashy Tag Heuer watch. That’s for amateurs. You are there to do some good and learn about the local culture. You’ll accomplish neither if you act like you are on a freaking cat walk. Travel as simply and as low tech as possible. Don’t be that walking target for a criminal.

There’s adventure and there is stupidity

Do not be an idiot. As much as you may be a thrill seeker, you want to avoid the ridiculous. Do NOT let the friendly taxi driver talk you into staying at a different hostel from the one the guide book recommends. Don’t go on bootleg tours of the city offered by someone’s “uncle”. Think twice about extreme sports or anything that could place you in significant physical danger.

Want to gain respect quickly at the local market? Learn to bargain like a local. Do it with a smile but be a good negotiator. Many developing countries have a very developed bargaining culture. You will not only disappoint if you don’t bargain, you will establish yourself as a big gullible target.  Be the opposite.  My mom taught me this as she took me with her to go to market in the Philippines. She developed good relationships with merchants by being a loyal customer but she made sure she never overpaid. They liked her but had a sense of respect for her market savvy.

Over to you. Tell me the tips that work for you in the comments. Or tell me what has backfired. Either way I am interested!