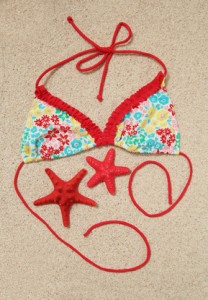 It was hands-down one of the funniest things I had ever seen on a beach.  I was with a friend in Nice, on the French Riviera, surrounded by locals and tourists in various stages of undress.  Not far from me were a couple of topless girls and local etiquette stipulated that everyone had to act like everything was normal.  And, for a French beach in the summer, everything basically was.  Well, at least it was until a group of American teenagers, in predictable khaki shorts and baseball caps, came over and struck up conversation with the topless ones.

The guys’ intent was clear: they wanted a picture with the women.  Amused at the ballsy request, the women obliged the horn dogs and posed with their newfound American friends.  The guys were delighted but conversation quickly dried up because of the language barrier and they took off.  The best part was when one of the guys hollered, “Y’all keep it up now!” over his shoulder.  Beautiful.

The young guys’ break with etiquette was amusing.  If they had been locals or at least somewhat accustomed to Mediterranean protocol, they would have been considerably less eager with their photo requests.  Everyone came out of this one well – the nervous kids, the nonchalant boob models and the amused onlookers.  Observing the whole incident made me think about the huge role of cultural rules in the day-to-day – right down to beach attire and how to acknowledge topless strangers.  It also made me think of what allows us to bend the rules of culture (in this case, approaching topless women) and test the boundaries society decides are appropriate.

Malcolm Gladwell in his book “The Tipping Point” identifies the drivers of societal change as Connectors (social magnets that are master networkers and love nothing more than working a crowd), Mavens (information specialists, people that have the information society needs) and Salesmen (Charismatic, persuasive people that can get people to agree with them).  When all three kinds of personalities come together and benefit from a strong message and favorable circumstances, you get enough traction to affect major societal shifts.

Watching the kids I saw each of the personality-based change agents.  There was the Connector – the kid in the group that probably was the reason they were all on the beach, skipping the assigned lecture on Franco-Spanish relations. Then there was the Maven – the pervy nerd who’d worked out what stretch of beach would yield the best topless odds. And finally, there was the Salesman who talked both his friends and the busty French into posing for the camera.

So there you have it:  a little example of how cultural change, however insignificant, can be achieved. Whenever cultural rules feel rigid and overbearing, remember that with some clever planning, some key leadership and a little luck, rules can bend and boundaries can shift.  And there’s nothing that some teenage spunk and some multicultural levity can’t fix.