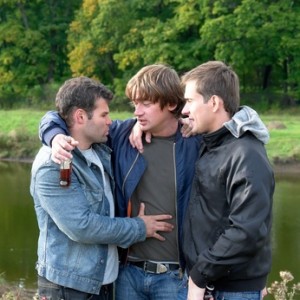 The “beso”.  It was one of the hardest things to get used to when I moved to Buenos Aires. Hetero men and women would greet others of the same sex with a kiss on the cheek.  My Argentine friends found it hilarious that on top of my gaffes in learning Spanish (I once asked for the local “place of pleasure” instead of asking for apartment storage space), I almost cringed whenever it was time to greet guys.  It was reminiscent of my freshman days in college when I had to force my reserved Scandinavian self to greet American classmates with hugs and loud, enthusiastic banter.  But the “beso” was even more of an invasion of space.  Luckily I’d had practice with the French “bisou” (kisses on both cheeks for the opposite sex) while studying in France so I had the mechanics down.  But the fact that men were involved was unsettling.

It should be said that the mere fact that straight men kissed each other in Argentina did not at all mean that they were effeminate in other ways. In fact, Argentine culture in general seemed to encourage alpha male behavior, complete with near-belligerent cursing and heckling in the stands at soccer games.  The “beso” was simply an accepted way to greet people, whatever their sex might be.Of course, same-sex kissing is not at all limited to Argentina, a lot of cultures find the practice perfectly normal. South Eastern Europe and some countries of South Western Europe, Latin America and the Middle East find it completely acceptable.  In the Middle East (with the exception of some moderate Islamic countries) it is more acceptable for men to kiss each other on the cheek than for men to kiss women on the cheek in public.  (A topic for a different post would be Arab male-on-male hand holding that had George W. Bush feeling a little uncomfortable when Saudi Arabia’s King Abdullah was visiting the US).
How do you adjust to something like same-sex kissing if you are from a different culture?  Dive in.  It’s just like language learning – you learn best by immersion.  In my case, I had to force myself the first few times.  Then the beso got easier.  It never felt completely natural but it certainly did not bother me after a few weeks of greetings.
The challenge can be to avoid Borat-scale awkwardness by remembering where you are. When I met my former Spanish tutor from Buenos Aires on a trip to Paris in May, the beso was gone, replaced by a hug.  That same greeting between old friends, if it had taken place in Northern Europe, could well have been a simple, if somewhat prolonged, handshake.  The problems creep in when you plant a manly kiss on Bubba at the Indy 500.  That could warrant a royal kicking of an entirely different set of cheeks.
Be a part of CultureMutt: LEAVE A COMMENT
Bjorn Karlman