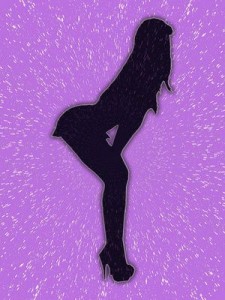 Here’s the Wikipedia definition for grinding: “Grinding is a type of close partner dance where two or more dancers rub their bodies (especially the genitalia) against each other in a sexually suggestive manner. It has gained popularity at high school and middle school dances especially in the United States where there have been cases of administrators attempting to ban it due to its explicit nature and incidence involving injury.”

Grinding or “freaking” on the dance floor is completely divisive in the reaction it elicits. People under the age of 40 are well accustomed to it and accept it as a fairly normal variety of club dance. Older generations are horrified and find it grotesque and inappropriate. It’s classic culture clash. Siri Agrell in Canada’s The Globe and Mail (November 22, 2007)  says that, “a growing body of research has found that sexually explicit styles of dancing do not lead to casual sex. To those who study human sexuality, modern dance club culture is actually more indicative of an evolution in courtship.”

Agrell quotes Columbia University socio-medical sciences professor, Dr. Munoz-Laboy who says, “Participants in these dances are actually bound by “an elaborate set of cultural rules – a veritable etiquette of gendered scripts for appropriate male and female conduct.” In a study published this month in the journal Culture, Health & Sexuality, Dr. Munoz-Laboy wrote that, “young women are the gatekeepers of dancing boundaries in the hip-hop scene. Even though most dances in hip-hop clubs involve grinding … there are levels of physical closeness that men cannot cross.” This seems to accurately reflect your average club etiquette where grinding is OK but overly tactile (male or female) dancers often end up shunned, nursing a lonely beer outside.

Agrell notes that Kingston physician Jonathan Huber, 32, published a report called “Sexually Overt Approaches in Singles Bars” in The Canadian Journal of Human Sexuality. In it, he states that grinding is simply part of a new script for twentysomething flirting and picking up.  “It’s the new ‘Can I buy you a drink?'”

Some would cite this as indisputable evidence that cultural norms since the sexual revolution of the 60s and 70s have grown increasingly base and animalistic and that the answer to it all is a cultural clampdown of fundamentalist fervor. Others, like Huber, take a more anthropological approach to grinding and see this as a neutral evolution in social interaction.

“This is a complete reversal,” he said of the behaviour he observed in bars in Ottawa and Guelph, Ont., while doing his research. “The touching happens at the beginning and only do the other things flow after that. It’s sexually overt on paper, but the intent is not sexually overt.” (The Globe and Mail)

All of this said, it is hard to discount the views of cultural conservatives that are quick to claim that this kind of social interaction, whether or not it leads to sex, is not helpful if what you want is to find a quality romantic partner. Just because grinding is acceptable club behavior and may even be part of modern courtship doesn’t make it a substitute for coffee and conversation.  Fair point.  But understanding the ‘ins and outs’ of grinding will at least make you a savvier and perhaps less pervy addition to the dating marketplace.