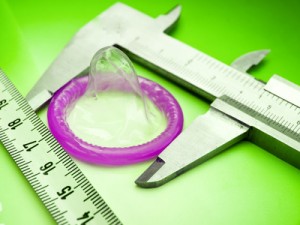 Here’s a fact to chew on: 45 % of men ‘fess up to wearing a condom that did not fit them in the last three months. Before you get all riled up about how irresponsible this is, understand the pressure that is on both males and the condom industry.  Just like the “no idea is a bad idea” mantra in conventional brainstorming, “no penis is a small penis” seems to be the enduring anthem of the condom industry.

Think about it: What condom manufacturer in their right mind is going to call one of their sizes “small”?  As Menachem Kaiser in “The Challenge of Marketing Small Condoms” (The Atlantic) puts it, “There are products where smallness is a marketing virtue, like cellphones or thong underwear. But small condoms are a marketing nightmare.” The article points out that the closest a condom manufacturer comes to indicating size is the carefully-worded “Snugger Fit” marketed by LifeStyles.

The confusion around condom sizing and the cultural pressure to avoid admitting to anything less than a crankshaft of a penis has obvious sexual health repercussions. Kaiser says of those men who admitted to wearing badly-fitting sheaths: “The misfits were significantly more likely to report breakage and slippage, along with difficulty reaching orgasm, both for their partners and for themselves, and a host of other sexual mishaps. Not surprisingly, men with ill-fitting condoms were more likely to take them off before sex was even over — all of which adds up to a massive failure for the one job a condom exists to fulfill.”

So how do you market minus-sized condoms to a “size matters”, “bigger is better” culture? You lie. Kaiser points out that Dr. Bill Yarber, of the Kinsey Institute for Research in Sex, Gender and Reproduction in Indiana, recommends re-labeling small condoms as “large”, regular as “extra-large” and so on.  Of course, as Kaiser points out, this invites ridiculous confusion and, “Yarber’s plan would have the true-to-life Magnum man in a pinch: his previously large-enough condoms would suddenly be a tight fit.”

Other options include spray-on condoms that are too much drama/time.  Also, vendors like TheyFit offer 70 different sizes that virtually guarantee a match for each man, but this craves some time-sensitive measuring and, Kaiser notes, “The site thoughtfully warns, ‘Watch out for paper cuts!’ ”

In a follow-up article to Kaiser’s, Judy Berman in Salon wrote, “Shocker: Small Condoms Don’t Sell”. Berman’s conclusion: “…perhaps what needs to change, if we really want our protection to protect us, isn’t whether we call a condom ‘small’ or ‘large’ so much as our own harsh judgments about guys’ penis size.”  But let’s be real, we’ve gone for untold millennia pontificating on penises and that is as likely to change as is the size of the male ego.