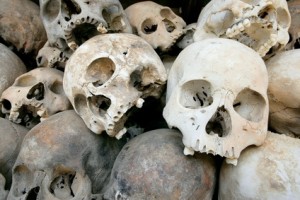 If genocide denial doesn’t work, maybe mass deportation will.  Or so goes the apparent logic of Turkish Prime Minister Tayyip Erdogan. Incensed that Sweden and the United States have recently decided to call the WWI era massacres of approximately 1.5 million Armenians “genocide,” Erdogan told the BBC’s Turkish service yesterday that, “If necessary, I may have to tell… 100,000 (Armenians) to go back to their country because they are not my citizens. I don’t have to keep them in my country.”

Despite Turkey’s aspirations to join the European Union, Erdogan also recalled Turkey’s ambassadors to Stockholm and Washington and, according to Reuters, “warned they could hurt a fragile effort to reconcile with Christian Armenia after a century of hostility.”  This echoes Turkey’s recall of its ambassador to Canada last year after Canadian Prime Minister Stephen Harper dared to mention the genocide.

Turkey denies that 1.5 million Armenians were killed in Turkey, although it concedes the killing of Christians as the Ottoman Empire collapsed almost a century ago. As more historians and foreign governments join together in condemning Turkey’s actions and its denial of genocide, the pressure is mounting on Turkey to admit to the sins of the past.

Erdogan has so far been incapable of anything but weaksauce rants about the “Armenian diaspora” that he claims is spreading falsehood and tarnishing Turkey’s reputation.  So far his behavior is amounting to international embarrassment for Turkey as Erdogan’s deportation threats are seen as overblown and petty, as well as being fairly hollow.  According to Reuters,  Aris Nalci, an editor at Turkish-Armenian weekly newspaper Agos, said such remarks are not new for Erdogan. “We are not taking it as a serious threat,” Nalci said.

Serious or not, Armenian Prime Minister Tigran Sarksyan replied with the understatement of the year: “This kind of political statement does not help improve relations between the two states.”  Last year, Armenia and Turkey made the progressive decision to start diplomatic relations and open their shared border.  Neither government has ratified the deal though and there has already been furious back and forth with both governments accusing the other of rewriting the text of the original agreement. Erdogan’s latest antics will no doubt add to the fun and further complicate any chance of success.

But let’s not be too surprised at Erdogan’s badly chosen words.  Prior actions prove him well-deserving of The Atlantic‘s description as “sometimes-dyspeptic.” At last year’s World Economic Forum in Davos, Switzerland,  The Atlantic reports that “the roughest moment came when Erdogan accused Israel’s Shimon Peres of being a killer. ‘Peres, you are older than me,’ Erdogan said. ‘Your voice comes out in a very high tone. And the high tone of your voice has to do with a guilty conscience. My voice, however, will not come out in the same tone.’ He went on, ‘When it comes to killing, you know well how to kill.’ ”

Peres tried to respond but, as this YouTube clip faithfully captures, it was too late: Erdogan had decided to storm off the stage.