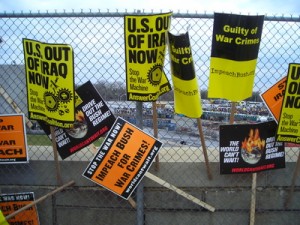 Just because George W. Bush said something doesn’t mean it was dumb.  Or at least that’s what Jeffrey Scott Shapiro seems to claim.  He’s the founder of Honor Freedom, a non-profit created to “Unite Bush Supporters”;  “Correct the Historical Record” and  “Teach America”.  “You don’t need to be a genius to be president,” says Shapiro.  The Honor Freedom website defends the most contentious Bush-era issues like:

1) The Iraq war (and all its disastrous related issues: hyped/non-existent Weapons of Mass Destruction; oil greed motivation; the mere suggestion that this was all daddy’s idea, etc.)

2) Why Saddam and his policies were bad and how that justified “the liberation”.

3) The dollars of US aid pumped back into Iraq to clear up Dubya’s mess.

4) “Information on how you can help correct the historical record or start a chapter of Honor Freedom in your area.”

In “The Bush Restoration Project“, Slate’s Jordan Michael Smith says, “Shapiro talks about George W. Bush the way Buddhists talk about the Dalai Lama. ‘He stands for truth, compassion and freedom,’ he says. ‘Bush instinctively sees the global picture that every living person has the right to be free.’ ”  Smith exposes the “nationwide public education program consisting of op-eds, media appearances, and free public seminars, the nonprofit group intends to teach Americans that George W. Bush was actually a great president and an even better man.”

Smith quotes Shapiro as saying Bush critics ” ‘are selfish people who don’t see the value of national liberation … isolationists who don’t care that the U.S. freed a people enslaved by fear.’ ”

Inherent in Shapiro’s approach is a realization that Bush’s reputation is in tatters and is in need of immediate mouth-to-mouth.  With the enthusiasm of a fanboy at an early nerd special premier, Shapiro wants to manipulate the public faster than time and presidential libraries can: “Those wishing to restore the president’s reputation must take a pro-active, aggressive approach that exports knowledge to the people. Merely relying on a passive institute such as a presidential library and waiting for people to learn the truth on their own will not be sufficient in this unique case.” (Shapiro in a commentary piece for The Washington Times)

“On much of the world stage, President Bush has been widely reviled as one of the worst U.S. leaders of modern times, and it is hard to think of an American president who has received a worse press since Richard Nixon,” states the UK’s conservative Telegraph.  The paper concedes that early moves in the Iraq war flopped; that Bush’s public diplomacy was disastrous; that his management of global anti-American sentiment failed and his response to Russia over Georgia was cowardly.  However, the same article argues that most of the critiques launched at Bush have been couched in “a venomous hatred of Bush’s personality and leadership style, rather than an objective assessment of his achievements.”  Praising Dubya, the paper raves, “Ten or twenty years from now, historians will view Bush’s actions on the world stage in a more favourable light. America’s 43rd president did after all directly liberate more people (over 60 million) from tyranny than any leader since Winston Churchill and Franklin D. Roosevelt.”

Time has absolved past presidents (Jimmy Carter and Harry Truman come to mind) of their sins and perhaps Shapiro and his flock will be successful in their spin.  For now though, what does Bush himself think about all this chatter?  It’s not easy to know.  Unlike Dick Cheney, the former president has laid low since leaving office and it looks like we’ll have to wait for his memoir (slated to be published this year) to gauge his current thoughts on his presidency.  And Bush has no formal ties to Honor Freedom. However, Shapiro did recently stay at the ranch of Bush’s nephew, Pierce, who introduced president and salivating one.  “You’re doing good work,” said the president.  Or at least so says Shapiro.