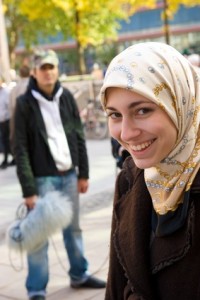 It happened WAY too much.  And it always happened when we were already running late.  Our old, disgracefully dilapidated beast of a Buick would shut off at the bottom of the long, steep driveway to the cookie-cutter Marietta, Ga. apartment complex where we lived.  My high-strung über-Scandinavian mother would then proceed to frantically wind down the car window, stick her head out as far it would go and yell “It STOPPED!!” with shrill, Nordic determination to the annoyed assortment of early-morning drivers behind us.  Humiliated, my sister and I would shrink down in our seats, willing the moment to pass.

This, of course, was only one of the whole smorgasbord of awkward experiences my sister and I had growing up with FOB (Fresh-off-the-boat) parents who had about as much interest in blending into local culture as we did in sticking out like sore thumbs.

I’ve met enough children of FOBs to detect some patterns.  The first of these is that immigrants often have an idealist, nonconformist streak.  It took guts and ignoring naysayers to move from their homelands.  Now that they are here, some of these qualities manifest themselves in a stronger-than-usual sense of motivation. They are also less likely to concern themselves with what others think.  While this singular focus has worked well for them, their children (who are more concerned with blending in) will often find this focus too narrow and abrasive.  I’ve rarely witnessed kids that have been able to change their FOB parents.  It seems that the best thing to do is to appreciate your parents’ work ethic and recognize that they are who they are.

Another thing about FOB parents is that although they (in most cases) chose to leave their home countries, they often are extremely patriotic and nostalgic about the homeland they left behind.  They will wax lyrical about the food, the culture and the beauty of home.  Ask them if they would like to go back though and they quickly shake their heads or talk loosely about what they might do in retirement. If you were born to FOBS and have to listen to your parents and their nostalgic rambling, take it all with a grain of salt.  It is good to be aware of your roots but realize that time and distance have probably embellished the memories of your parents’ home.

One of the more obvious things about FOB parents is their accent and how they carry themselves. Accents rarely change if someone learns a language as an adult so chances are that your FOB parents really sound foreign.  My mom’s accent used to embarrass me, but nowadays it is much more of a source of amusement.  As with most things about foreign parents and their cultural idiosyncrasies, if you can see the humor in the situation, you can actually enjoy it.  On that note, let’s conclude with a video from HappySlip, a YouTube-based comedy series by Christine Gambito, a Filipina American who plays all her characters and who has the funniest take I have ever seen on the FOB experience…