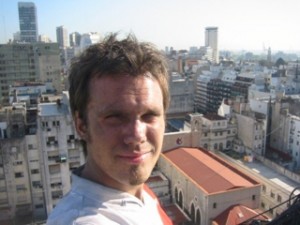 One of the most harrowing experiences I’ve ever had took place in October, 2005 in Buenos Aires, Argentina.  Two friends – Mike and DJ –  and I narrowly escaped dying in a fire that broke out in our apartment building.  The tale includes near-suffocation, stepping out of 14th floor windows and scaling an apartment wall high above Buenos Aires.  I thought it appropriate to include this post from a blog, Casi Porteño that my friends and I used to write. It captures some of the madness from that awful night:

Hey – just a note. So in a day or so, we are all going to write about the fire experience. Sorry about the absence. Nearly dying, and having your apartment trashed kinda puts a damper on things, especially blogging. However, we found a new wireless zone and will be up and running. Also, I have been working on my med school app like crazy so its been busy. Anyways, get ready to be blown away. Love to all, Michael J.

And now over to Bjorn (enjoy the writing of the college student that I was):

“DJ and Mike woke me up with their talking at around 4 AM. I was super tired because Mike and I had come back from a movie at like 1 AM. I didn´t have a clue what was going on but something smelled really weird. Kind of a chemical smell. I joined the guys at our window and saw what they saw – smoke coming out of a window on a floor some ways down. We were nervous but at the same time were fairly calm after a crazy amount of fire drills at Andrews. I put on some jeans and my running shoes. I packed my new laptop and a few other things including money and my passport. Things were crazy with all of us sort of talking at once. I remember yelling that we just had to get out right away, that we did not have any more time.

The best way I could think of to get out of the building was down the stairs. We were near the top, floor 14 of 15 floors. As soon as I opened the apartment door I was met with smoke. That was a bad sign but I thought I had no other option but to keep going. I was going as quickly as possible but the smoke was making it really hard to breathe and I couldn´t see a lot. I remember seeing a woman screaming for her husband in the smoke. It was getting hotter and the smoke was just ridiculous. For the first time in my life I felt raw desperation. It was horrible. At some point I realized that I was all alone. Mike and DJ had been smart and turned back. For some reason I kept running down. I got down to the seventh floor. A gas explosion had blown an apartment to pieces and as soon as I saw the flames I realized that I could well be facing the end right there.

I was breathing in hard and feeling weak, the combination of the smoke, the heat and just the whole situation was terrible. I remember yelling something up the stairs, hoping the guys would hear me. I don´t even remember what I said, something like, ‘we are not getting out this way!’ Everthing felt so sudden. Five minutes earlier I had been sound asleep. I thought about my family and how unfair this all felt. But there really was no time to dwell on any of it so I turned and started running up the stairs again with my backpack. Even without the smoke this would have been tiring but the fact that I was just gasping and sucking in all the smoke was making it torture. And I really felt that I was running the wrong way. I remember looking up and seeing the sign for the 13th floor. Almost there. I ran up the last steps and made it into our apartments. I saw DJ and Mikes with their heads out of the window, trying to breathe oxygen. I had never been so happy to see them.

I joined them at the windown. DJ thought they had lost me. The breathing was hard because smoke was billowing in from the apartment and from the window beneath us. We had to think hard because the smoke was so intense that we stood a good chance of blacking out. Also we had no idea if the fire would spread or not. I remember praying out loud. I thought about me and God and what would happened if I died. We heard sirens in the background but couldn´t wait. And there was no fire escape. DJ did the bravest thing I have seen in my whole life and climbed out of the window, grabbing some cables that were attached to the wall. He said something like, ‘OK, this is a crazy move guys but I think it is possible.’ Then he just started climbing. Understand, there was no way of knowing if he would black out and fall, if the cables would break or if he would just be electrocuted. He kept climbing and made it to the roof.

DJ then started yelling and Mike and I to do the same. We really didn´t want to because falling meant death on impact. We tried waiting to see if the smoke would thin out. It didn´t. We had to climb. Mike went first. I was seriously scared for him. He made it. Then it was my turn. I was seriously freaked out but somehow my thoughts about God and whatever would come next had calmed me down. There was certainly no epiphany but I felt the same kind of peace that I have felt at many times in my life when I have really thought about the bigger things in life. Somehow that sense of peace helped me out and I stepped out of the window, grabbed the cables with my hands and my feet and started inching my way up. I grabbed hold of an AC unit on the 15th floor and somehow got on top of it. But I was exhausted and I couldn´t get a good grip on the ledge of the roof. With all the smoke in my lungs I was really struggling. I will always be grateful for what happened next. DJ and Mike grabbed my hands and, with me climbing with my feet, they pulled me up far enough so I could get one knee over the edge to safety. I scrambled over and there was suddenly this strange peace on the rooftop.

A guard and this other guy on the roof were standing by a door that led down to the stairs of an adjacent building. We ran down the stairs until finally we got to safety on the street. People were crowding around the police, firefighters and ambulances. I told the firefighters about the woman that was still up there. They got her out. I think we actually saw her in the hospital. We ended up breathing oxygen and I had a blood test for carbon monoxide poisoning since I had breathed in so much of the smoke in the stairwell. I was fine though. After an hour and a half or so we left the hospital looking like we were coalminers.

I have yet to make sense of all this or what it means for my life. What I do know is that I am very happy to still be around and that I want to make the best of this new lease on life. I could have died without the help of my friends so I will never forget what they did. I also know God answered our prayers and that this experience has forced me to focus more on what is important.”