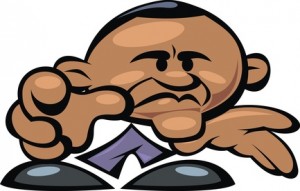 Remember John McCain’s “Obama fame” epiphany during the 2008 presidential elections? His negative ad pegged Obama as out of touch and the “world’s biggest celebrity”, pejoratively splicing in clips of Britney Spears and Paris Hilton with crowd shots of Obama rallies as the Democratic contender drew record numbers both at home and internationally.  Reactions abounded. Paris Hilton struck back with this parody ad about the “wrinkly white haired guy”, the “oldest celebrity in the world”.  The media was abuzz as, at least temporarily, the message of Obama’s supposedly counterproductive celebrity seemed to stick with some voters. But ultimately the roadblock proved incapable of doing any real damage and the young Democrat rode his wave of popularity all the way to a very decisive November 4th win.  The raw celebratory energy worldwide was palpable.  Gone was the bumbling, trigger-happy Texan who had infuriated world citizenry with his failure of a foreign policy and the near-sighted disaster of an economic policy that had brought the world to its knees. Impossibly high expectations and desperate hopes for something far better were pinned on the new guy. Conservatives prayed for the bubble to burst while liberals crossed themselves, willing global patience with the new administration.

Skip to the present.  As fickle as the American electorate can be, and despite his substantial drop in domestic popularity, Obama’s international celebrity and popularity have remained high.  While American memory of the blunders of his predecessor may be fading, international scars are still keenly felt and there’s still much hope in the new president.  Cracks are appearing though.  Take recent daggers thrown in the UK over the BP Deepwater Horizon disaster.  Conservative UK commentator, Norman Tebbit, recently called Obama’s approach to the BP disaster a “crude, bigoted, xenophobic display of partisan political presidential petulance.”

The source of UK anger against Obama stems from what is seen as an overly aggressive stance against BP.  Tebbit’s rant finds at least partial backing in some of Obama’s BP-related posturing:

“crude” = “I don’t sit around talking to experts because this is a college seminar… we talk to these folks because they potentially have the best answers, so I know whose ass to kick.” (Obama’s June 8 NBC interview)

“bigoted” = The relentless attacks on Obama’s attacks on BP as the disaster spirals completely out of control and Obama plays into British accusations of of “‘buck passing’ and ‘beating up’ the British-based company” (Daily Mail) instead of problem-solving.

“xenophobic” – Obama’s occasional use of the name “British Petroleum” that BP dropped years ago and therefore (it can be argued), playing this up as an issue with Britain when really this is the mistake of a multinational, a large stake of which is American.

“Winding up a hate campaign against the British is not a terribly smart policy. It may win Mr. Obama political support amongst the less well-informed voters right now, but the long-term effects are less sure. BP is also a major US company. Busting it might not be a very smart idea and not just on economic grounds. The message that non-US companies are likely to be treated as political punchbags would be a profoundly political message, too.”  (Tebbit)

Joining the ranks of political malcontents, Boris Johnson, the Conservative mayor of London, said that he was concerned about “anti-British rhetoric” and “name-calling” from American leaders.   And it’s not just a few oversensitive conservative politicos that are pissy: the UK’s Sunday Times quoted a survey that stated 64% of Brits and 47% of US residents claim Obama’s handling of the BP crisis hurt the relationship between the two countries and that in both countries, 22% of respondents went as far as calling Obama anti-British.

As exciting as this rift-rhetoric can be, much of the Anglo-American hand-wringing about it took place before a June 12 conversation in which Obama tried to soften the perceived attack on Britain over the disaster by saying that his unhappiness with BP had nothing to do with its British identity. Following the conversation, The Times‘s journalist Giles Whittel wrote: “The notion that American attacks on BP are anti-British is embarrassing. It is a fiction incubated by the thin-skinned, solipsistic and broadly anti- American world view that bubbles up like warm bitter in the best-kept villages of Little England whenever anyone in Washington has the temerity to break with the tradition of referring to the Old Country and its pretensions with anything other than awed admiration.”

Further evidence that Obama wanted to make peace?  He put beer on the table.  The trick worked a year ago when Obama invited black Harvard professor Henry Louis Gates Jr. and white Cambridge, Mass., police Sgt. James Crowley to the White House for a beer after causing an uproar by saying the police had “acted stupidly” in arresting Gates, Jr. for disorderly conduct. This time around, Obama and Cameron wagered a beer over who would win the June 12 US/England World Cup game.  When the teams tied, the politicos presented each other with their respective beers and gushed about the special relationship between the two countries.

There’s even a chance that the Anglo-American relationship will improve after the BP fiasco.  The evidence? Obama’s gift-giving is improving.  A beer far outshines his last gift to a British PM.  In exchange for an ornate pen holder from former PM Gordon Brown, Obama presented the British leader with a set of DVDs that don’t even work in British players.