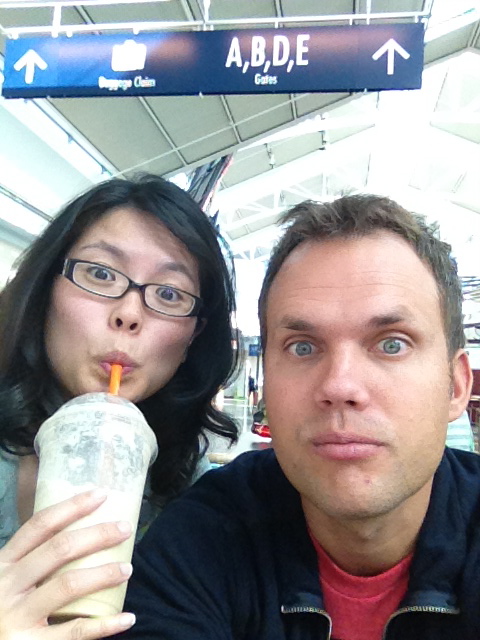 Are you wasting your life?

In many ways there was nothing wrong with our lives. Jammie and I had respectable, sought-after jobs. We had wonderful, supportive friends. We lived in a fun little college town in Northern California. We made decent money for a young couple. We were active in our communities. On the surface, our lives looked fine. If life continued as it was, we could really settle down, live comfortably, start a family and raise kids who would repeat the cycle.

But for years we had harbored a will to do something bold and fresh. Something that wasn’t just about a paycheck, benefits and water cooler conversations… about going through the motions. Something that would change our lives completely.

We knew what it was and for years we had secretly been talking about it: a trip around the world. But not just any trip. This would not be just a vacation. It would be an extended trip. A long-term adventure where we helped other people through service projects. This would be something idealistic. Something radical. Something completely, utterly life-changing that launched us on an international, meaning-filled life of service for years to come.

Every time we talked about it we got more excited. We knew this could change everything.  And every time we put off the trip off we grew more frustrated.

We did all the scary stuff as fast as we could so we wouldn’t back out. We told those closest to us of our plans. Job resignation letters were drafted, re-drafted, signed and delivered. We sold, gave away or dumped a ton of stuff that we had collected over the years. We bought round-the-world tickets. And we got on a plane.  This was it!

We are now one month into living in Buenos Aires (city #2 of our Bangkok-Buenos Aires-Berlin-Bombay tour) and starting the  fifth month of our year.  We are starting to adjust to our new life. I am not going to pretend that we like everything.  We often miss family and friends.  I could do without the nightly mosquito bites and I could kill for some decent Mexican food.  But for the most part life has improved drastically.

I could spend several posts listing all the ways our lives are better but for now I can say this with all honesty:  For the first time in years it feels like everything I used to dream of doing is still possible.  I walk around unbelievably excited about life.  I am no longer as cynical.  I don’t roll my eyes when I hear people talk about their lives being happy.  I am happy.  And I am rapidly gaining perspective on how I want to live the rest of my life.

Here are some things I have learned:

Don’t waste your life thinking things will change – Part of what kept us from taking the bold step to get on a plane and follow our dreams was the vague feeling that things would change if we just put in a little more time. Maybe things would change with a little more money… or a more adventurous week of vacation time or a slightly better job. The truth was that none of those things would really change anything. Every little step we took on the same conventional path confirmed the obvious: more of the same would lead to a lifetime of boredom and regret.

Don’t waste your life thinking that “benefits” are a valid reason to stay in a job – Medical, dental, paid time off, growing retirement funds… we couldn’t just walk away! Or so we thought. But the golden hand cuffs were surprisingly easy to shake off when we realized that they were standing between us and doing what we really wanted with our lives. Security is fine but not if if means being handcuffed securely to a suboptimal life!

Don’t waste your life dreading risk – Within two weeks of landing in Bangkok we were offered four jobs between the two of us. We were not interested in taking them just then but we did the financial math just for fun anyway and the reward for shaking off the golden handcuffs was clear immediately: If we were to get jobs we could easily save over twice what we had been saving in the US. So much for our risk-averse golden handcuff thinking!

It was already clear that this world was full of opportunities and that risks where never quite as scary once you took them.  The rewards of action are great.  Everyone’s circumstances are different but don’t make the mistake of living your life dodging risk.

Don’t waste your life worrying about acquiring stuff - Traveling has taught us a lot of valuable lessons but one of the most important is this:  acquiring more “stuff” is one of the most pointless things we do in life.  Jammie and I ended up donating a ridiculous amount of our possessions to our local thrift store when we left Northern California.  I mean it was crazy. These were mostly things that had cost quite a lot to buy.  And in the end it was all just stuff… stuff that was in the way of us and a better, freer life.  This stuff didn’t add value; if anything it was a hassle, a nuisance.  The hours we spent giving or throwing it all away have taught me one thing as we walk past shop windows around the world: Keep walking.

Don’t waste your life chasing the American Dream – The house, the car, the white picket fence.  Keeping up with the Joneses is less and less attractive when you realize that they are upside down on their house, their possessions own them and living life chasing the American dream has them tied down and miserable, running faster and faster on the hamster wheel while their finite days on Earth slip away.  The American dream is not what it is cracked up to be. People should get over it.

Let’s end with some good news:  It is never too late to make a change… to make the jump.  If you are wasting your life, the time to stop is right now.  Right this second.  Stop it.  Seriously.  Don’t rationalize away this moment.  If you are tempted to do so, accept this absolute truth: This post was written for you.