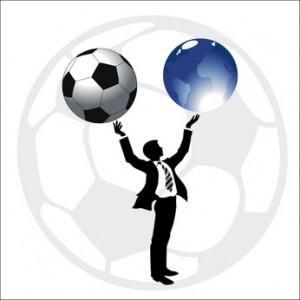 Talk to enough of the American cultural elite about the upcoming World Cup and you’re bound to hear about those ignorant xenophobes in the fly-over states and their backwards claims that soccer is un-American and a gateway to socialism.  Unlike the demographics of soccer in the rest of the world where it is the game of the masses, the bulk of soccer in the United States is confined to women’s leagues, recent immigrant enclaves or upper middle class suburban communities where births are particularly awkward as one has to accommodate the silver spoon protruding from each babe’s rear.

Despite optimistic attempts at tapping into the star power of international brands like Beckham, Major League Soccer (MLS) in the United States is at best considered an emerging league and, more frequently, is the butt of jokes in the American sporting world.  This truth puts America at odds with the rest of the world, not because anyone is defending the quality of the MLS (everyone agrees it sucks), but because soccer is, by far, the most popular sport in the world.

The World Cup is not only the biggest sporting event on the planet, IT IS THE BIGGEST EVENT, end of story.  FIFA, the international governing body of soccer, estimates the viewership of the 2006 World Cup final at 715 million viewers.  Despite this kind of worldwide interest in the sport, the average American is barely aware of the World Cup and is still saying things like, “If they got rid of the goal keepers I might watch it.”  The reasons for this kind of unawareness are complex.  Access is one of them. Twenty years ago, following major European games basically required learning a second language and hunting around for obscure international newspapers.  Even today, coverage of world soccer on American sports websites is thin.  But the problem is not just access.  You also have cultural crusaders in what How Soccer Explains the World‘s Franklin Foer calls the “anti-soccer lobby”.

Says Foer: “There exists an important cleavage between the parts of the country that have adopted soccer as its pastime and the places that haven’t.  And this distinction lays bare an underrated source of American cultural cleavage: globalization.”   The message is clear: parts of the country – the blue parts on the electoral map – tend to be more susceptible to globalization and are therefore more interested in a global phenomenon like soccer. The red states cling to guns and religion and baseball and shun outside influences like soccer. Zeroing in on the anti-soccer lobby, Foer sums up the haters’ sentiment as he quotes USA Today’s Tom Weir: “Hating soccer is more American than apple pie, driving a pickup, or spending Saturday afternoons channel surfing with the remote control.”

Foer quotes prominent American conservative, former Buffalo Bills quarterback Jack Kemp who, in 1986 said the following on the floor of Congress: “I think it is important for all those young out there, who someday hope to play real football, where you throw it”; that “a distinction should be made that football is democratic, capitalism, whereas soccer is a European socialist (sport).”  It seems that wild claims on the Congressional floor about creeping socialism never go out of style.

Foer also quotes radio shock jock Jim Rome who raved, “My son is not playing soccer.  I will hand him ice skates and a shimmering sequined blouse before I hand him a soccer ball.”  With this kind of rabid and fundamentally maddening reasoning adding to the national conversation, it is no wonder that many stay away from soccer.

Max Bergmann for the Huffington Post: “What is so bizarre about this is how much the neocons sound like American-hating Europeans. Both dismiss American talent, American enthusiasm for soccer, and American understanding of the game. Just as neocons — and other soccer-hating sports writers of my parents generation — insist that we don’t get soccer and don’t care, European soccer writers are right there with them saying that Americans don’t get it and don’t care.”

David Winner, author of Brilliant Orange / The Neurotic Genius of Dutch Soccer, claims that American soccer fans  “tend to lean liberal”  like Holland’s national team because they are “predisposed to liking the country itself”.  He then waxes lyrical about how Holland “represents the best that bourgeois society has to offer: a genuine liberal spirit, the epitome of a certain idea of civilization.”

Soccer Against the Enemy’s Simon Kuper writes, “The game remains too good a way of understanding the world to discard.”  “In the States, being a New Fan is often a mark of being a cosmopolitan.  Soccer’s advance in the country is an idex of how American daily life is globalizing.  The two groups of Americans who are probably keenest on the game – immigrants and their direct descendants on the one hand, and the highly educated on the other – are precisely the most globalized Americans.” (He includes Obama, “the alleged West Ham fan… son of a U.S. born mother and immigrant father,” in this cross-section of America).

In The Ball is Round / A Global History of Soccer, David Goldblatt quotes British historian Eric Hobsbawm who wrote, “The twentieth century was the American century in every way but one: sport.”  Goldblatt says, “This is not exactly news to anyone, but it remains an extraordinary and under-explored anomaly; an almost unique reversal of the dominant patterns of global influence and power.”

So what should the future hold for America and soccer?  Will we continue to see the cultural cleavage grow as it is pushed up by soccer, or are there other options?  As a Swede I’ve had to nurse my own disappointment at not having Sweden qualify for this summer’s World Cup with the hope that the US will go far instead.  The US advanced to the quarter finals in what many considered the coming of age of the US team at the 2002 World Cup.  Americans that had previously not paid attention to soccer learned that the US could not only compete in the sport, but that it had a chance of dominating.   Although the 2006 World Cup was a disappointment, continued American successes, along with the forces of globalization will hopefully result in a burqa being tossed over our supple cleavage.  America has always enjoyed a new frontier to conquer.  Why not soccer?

“Soccer’s mission in the United States is not, I think, to supplement or challenge American football, baseball or basketball, but to offer a conduit to the rest of the world; a sporting antidote to the excesses of isolationism, a prism for understanding the world that the United States may currently shape but will increasingly be shaped by.”  (Goldblatt )