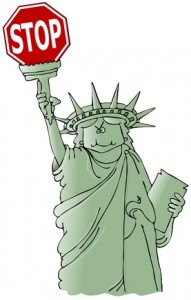 Arizona Gov. Jan Brewer sure knows how to dial back the pace of progress.  Today, Brewer signed into law a bill that will allow police to demand legal status papers from anyone they think gives off an illegal immigrant vibe.  Challenged by Chris Matthews on Hardball last night to provide one non-ethnic clue that law enforcement would pick up on to round up illegals, Rep Brian Billbray (R-CA) said, “They will look at the kind of dress you wear, there’s different type of attire, there’s different type of — right down to the shoes, right down to the clothes.”

So if you live in Arizona, your dressing rituals will have to allow for more than color coordination and avoiding your fat pants: You will also need  to gauge just how illegal you look before you walk out the door.  Like two dudes at the movies with an obligatory “I’m not gay” seat between them, who knows the lengths people will go to not look border-hopperish?

It is hard to decide what is more crazy-making: the fact that backers of the law are so prejudiced that they think you can identify undocumented individuals walking down the street based on clothing or vague hunches, or the fact that these fearmongering xenophobes have the naivety to argue that this isn’t going to turn into legally-sanctioned racial profiling.  Brewer claims that she won’t tolerate anything of the sort as, simultaneously, she stokes the fears of Arizonians in a shameless mid-battle re-election bid.

Even President Obama himself has tried to stop this legislation being voted into law.  He deemed the Arizona moves “misguided” and stated that they “threaten to undermine basic notions of fairness that we cherish as Americans, as well as the trust between police and their communities that is so crucial to keeping us safe.”  Obama has ordered his legal team to examine the legality of the decision in Arizona and said that there must be national immigration reform or we would allow for more “irresponsibility by others.”

In classic conservative “us and them” prattle, the bill’s Republican sponsor, state Rep. Russell Pearce of Mesa, said that Obama and other critics of the bill were “against law enforcement, our citizens and the rule of law.”  He claimed that the new legislation would remove the “political handcuffs” on police.  “Illegal is illegal,” said Pearce, “We’ll have less crime. We’ll have lower taxes. We’ll have safer neighborhoods. We’ll have shorter lines in the emergency rooms. We’ll have smaller classrooms.” Why didn’t he just continue? We’ll have less shady brown people.  We’ll have cleaner accents.  We’ll talk to our neighbors again.

This has been a sad day for civil rights.  Let’s push for immigration reform before we are all Arizonians. 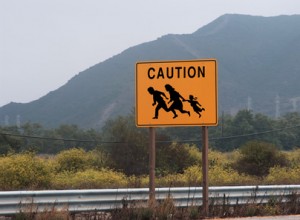 Anti-immigration Republicans were dealt a hearty smack in the face by American Conservative editor, Ron Unz in the March 01, 2010 issue of the publication.  Conservative bigots have argued for years that crime statistics prove recent Latino immigrants are dangerous.   In His-Panic / Talk TV sensationalists and axe-grinding ideologues have fallen for a myth of immigrant lawlessness, Unz looked at federal crime rate statistics and found that such conservative claims are the result of lazy, prejudiced thinking.

Bumbling dolts, ensconced in thinly veiled white supremacist justifications of know-nothing hate, have made claims that crime stats prove that the incarceration rate for Hispanics is 150% that of Caucasians.  Rather than resorting to flimsy liberal gabble about how this stat does nothing but prove the prejudice of the American legal system, Unz actually analyzes the crime data.

Attacking xenopobic, conservative anti-immigration fear-mongering, Unz asks, “… are these concerns rooted in the same excitable and ideological mindset that produced endless stories of Saddam’s notorious WMD, with activists and their media accomplices passing along rumors and personal beliefs in pursuit of a political agenda rather than bothering to determine the facts? Does America face a Hispanic crime problem or merely a Hispanic crime hoax?”

This is an entirely valid question.  Why do we put up with axe-grinding, numbnut imbeciles like Dick Cheney and his relentless campaign to justify his disastrously irresponsible, nightmarishly isolationist and utterly fear-based foreign policy?  An embarrassingly pronounced flank of conservatives love nothing more than inciting fear in their followers. When you take this kind of fear and turn it against immigrants (as Glenn Beck and his various incarnations do), the results spell an indisputable megaflop for basic human relations and intercultural respect.

Then there’s the flipside of all this.  Let’s not forget Ron Unz himself is a conservative. Obviously, it is equally lazy to label all conservatives as fanatical, enthnocentric dum-dums.  “Conservatives aren’t anti-immigrant, they’re anti-criminal, much like liberals are anti-tax filing.  Loving your country enough to request that anyone who wishes to be a member abide by their immigration laws, is not anti-immigrant, and making such an assessment by accusing the entire conservative philosophy as being racist is… well … anti-intellectual,” says Rusty Weiss in News Busters.

Fair enough.  But if the conservative gripe is with crime rates, then perhaps it would behoove Republicans prone to blanket pronouncements to actually study the data instead of quivering over the dangerous world beyond their white picket fences.