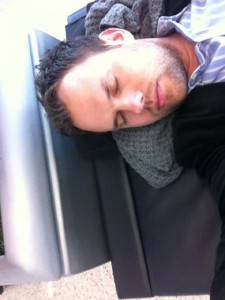 It all started when I was a freshman in college.  A couple buddies and I had flown from Geneva down to the French Riviera and, after an action-packed weekend we were on the way back to Geneva.  Only we didn’t want to pay for the last night at the hostel, especially since we had a super early flight and it hardly seemed worth paying for a night of very little sleep.  So we took the train out to the airport in Nice and stumbled in a little before midnight.  We set up camp next to the check-in desk, laid our sleeping bags out on the floor and slept fairly well until it was time to catch the flight.  I was so happy with the experience that I have become a huge fan and evangelist for airport overnighting.  Here are the advantages, as I see them, to skipping on hotels and sleeping at airports instead:

As mentioned, this is what got me started sleeping in airports.  It is hard to find even motel accommodation in most world cities for less than $50 so if you are traveling on a budget and would rather spend your $50 (or much more) on something else, airports are a good option, at least for  a night or two.

With a few commonsense steps, you can safeguard passports and wallets (I sleep with them in my pocket).  After that, airports are often fairly safe places to sleep.  They are patrolled constantly and there are security cameras everywhere.  I have spent many a night in airports and never once been robbed or given any trouble whatsoever.  You are more likely to be troubled in an open-plan dorm-style hostel (large rooms filled with beds) than you are at an airport because airports invest so heavily in security.

One of my pet peeves about being on the road is the condition of restrooms.  I hate dirty restrooms and will often bluff my way into upscale hotels to use nice facilities.  The great thing about airports is that the restrooms are typically in respectable shape.  They are fairly clean, have toilet paper (in certain parts of the world this is far from a given in public facilities) and many airports have showers.  Check out this awesome site for ALL you would ever want to know about the best airports to overnight in and the amenities that each have.

OK, so not always.  But more and more stylish sleep pods like these in Atlanta and Philadelphia, these snooze cubes in Dubai and these super cool sleep boxes in Moscow make it not only easier to sleep in airports, but they allow you to do so in style.  A word of caution on these though… the pricing adds up to that of a hotel if you sleep for several hours so these sleep pods are more for shorter naps.  My preference is the trend in more and more airports to get rid of those ridiculous arm rests and simply create couches like the one below that I slept on for hours in Sacramento last Sunday. 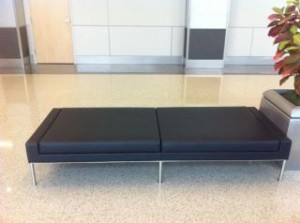 Alright, those are my initial thoughts on sleeping in airports but I’d be interested in hearing your ideas.  Hit me with some in the comments.