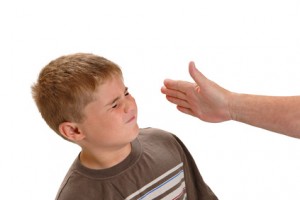 I think I got smacked once as a child.  In fact, I am not sure if it actually happened or if I just am remembering wrong.  My parents don’t believe in spanking kids.  They are Swedes.  Sweden banned spanking children over 30 years ago.  As in, it is illegal to spank your child in Sweden.  Since then over 20 countries have followed suit.  The United States is not one of them.

Jammie and I talked over the issue of how to discipline our future kids as part of our premarital counseling.  It wasn’t the easiest topic to discuss because we didn’t agree.  Spanking is more common (although not universal) in the Filipino culture and Jammie was not as against it as was I.  We kind of put the issue on a shelf.  We are usually able to arrive at compromises but this one will, I am sure, be discussed at length.

I am sitting in Barnes & Noble as I write this and a few minutes ago I flagged down a doctor friend who was in here looking for a gift.  “I’m writing a post on whether or not we should spank kids,” I told her.

“What qualifies you?” she asked.

“Nothing,” I replied.  She laughed but then pointed out that I had my own childhood to pull from.  But my childhood involved a whole mess of cultures clashing loudly.  I lived in Asia, the US and Northern Europe and basically saw every approach to discipline imaginable.  The blessing and the curse of seeing so many different ways of being human is that you are a lot less likely to have very fixed ideas of what constitutes right and wrong.  I don’t mean this in a strictly moral sense.  I like to think of myself as a fairly ethical chap.  But on something subjective like appropriate discipline I don’t actually have a very dogmatic position.

I think it all comes down to the spirit in which you discipline a child.  My parents believed in trying to reason with my sister and I, even when we were still fairly little.  To an extent, this worked but some would have argued that the verbal discipline would have been a little more effective if paired with a swift (light) swat to the behind.  But I knew that my parents meant business and I knew that I actually hurt them when I misbehaved so the spirit in which they disciplined me tended to work.

On the other hand I know of friends of mine with parents that were equally conscientious but came from a more swat-friendly culture.  They were well-behaved as well, but were spanked regularly for various infractions.  And I don’t think they grew up with the issues that the anti-spanking lobby constantly brings up.  They didn’t express their anger through violence any more than any other kid on the playground.  They did not seem any less capable of resolving conflict through reason and conversation than was I.

Should a Village Raise a Child?

As much as I was raised partly in collectivist societies and I believe that the village raises the child, I DO NOT believe in the collective right to discipline children.  The first school I attended still spanked children.  I was proud of my dad who put his foot down and demanded that the practice end.  If anyone were to touch my future kids at school I would do my best to make sure they were put behind bars.

How were you raised?  Were you spanked?  Or did discipline come in a different form?  What is your own take on what’s right?  Tell me in the comment section.

28 thoughts on “Should you Spank your Kids?”