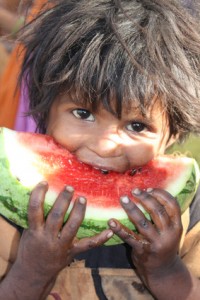 The most recent run-in I’ve had with someone begging was last week when I gave a man a dollar outside CVS in my current hometown of Chico, CA.  He turned around and said, “to be honest, if I scrape together enough tonight, I’ll go get myself a beer.”  I regretted my donation.

I first started seeing signs about beer and begging in downtown LA several years ago.  “Broke and Need Beer”, or something to that effect is what one guy’s sign said at his regular station just off Wilshire Boulevard.  I remember thinking it clever and worthy of some spare change but then as I started to see the line used in other parts of California and I got over my amusement and grew indifferent to the signs.  Was my indifference wrong?  A lack of compassion?

Begging takes on different forms in different parts of the world of course.  I remember being horrified as a disabled man begged on the streets of Bangkok and was forced to pull himself along on his chest, using his hands to move forward.  I’ve seen similar situations in other parts of Asia where you cannot help but pity those that beg because they are blind, mute or suffering from some other very obvious physical calamity.  What is the compassionate thing to do?

It gets even worse when children are involved.   From asylum seekers in the UK, carrying babies and begging in London’s Leicester Square to the children that would crowd around me even in richer areas of the Peruvian capital Lima, children are often used with great success to prey on the good intentions of the passerby.  I remember a friend of mine who felt like he needed to give and took a whole flock of kids out to eat in Buenos Aires.  I felt bad for him first.  I had grown used to almost ignoring requests for money.  But then I second guessed myself.  Was my cynicism wrong?  What if they didn’t have shady overseers that they had to hand all of the money to at the end of the day?  What if their stories were true?   I brushed my questions off as guilt-induced naïveté.

I don’t feel like I have ever gotten a satisfactory answer to the question of whether or not to give to beggars or the homeless.  I have heard a lot of the quick commonsense reactions – “give to specific charities instead”, “buy them food”, “tell them to get a job”, “show them how to get to a shelter”.  Depending on the situation, each of these common reactions are helpful to an extent.  But none of them make me feel much better.  They may lift the guilt I feel about walking by but they don’t fundamentally help.

A Little Help from Government?

Is the answer legislation?  Some of the left-leaning friends I used to hang out with in college were sure this was the answer.  A bunch of us worked in a very economically depressed town in southwest Michigan called Benton Harbor.  A lot of us felt that, as nice as it was that we were out there tutoring, mentoring and delivering food, nothing would change until there was systemic change in the form of government programs and better educational opportunities.  On some level I still think this is true but the abuse of public welfare that was also evident as we worked with family members that refused to even look for work made me cautious of looking too confidently to government spending for answers.

What do you think?

As much as I write CultureMutt to advance what I call “savvy, global do-gooding”, I don’t like pat answers to complex problems so I am simply going to admit my deep confusion at how to best help when I encounter homelessness and begging.  I have given at times and I have not given far more often.  I have helped out a half-way home.  I have talked to homeless people on the street and at shelters to try to understand their stories.  I’ve tried to read up on what to do.  I’ve talked to those “in the know”.

I don’t know that I am any closer to solutions.  What are your thoughts?  What do you do when you are approached for money?  Please leave your ideas in the comment section

16 thoughts on “Should You Give to Beggars?”