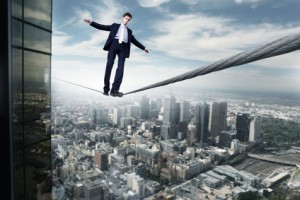 I was sweating bullets.  “We normally only hire native French speakers for these positions,” the manager sneered.  My first call in my summer telemarketing job had been less than stellar.  I was calling in French to business execs in France, Belgium and Quebec.  The young manager was not much older than me and was eager to throw his weight around.  I could tell that he was going to be trouble.

I muttered something and kept calling.  The next conversation was not better.   “Not interested.”  This was going to be rough. Had I made a mistake taking this job?  Was my French not up to par?  Had this been too much of a risk?  Was I just setting myself up for massive humiliation? There was no way to know yet so I stayed on the phone, hoping against hope that the “next call” would be better.  It rarely was.

My direct supervisor was not much of a creative soul and simply opted for old school pressure.  “Show me the leads (“yes” responses) Bjorn!  I need better than this!”  He kept at it day in, day out.  I was heating up for a shouting match.  Finally I took him into a conference room.  “You better lay off, your pressure isn’t working!”  I told him.  Luckily, the comment seemed to help more than it hurt.  He gave me more space.

“The people that get leads are the ones that believe they will…” I overheard another floor manager, (one that I liked) say to another caller.  I wasn’t sure how much it would help but I decided to try this approach and believe that I would rake in leads.  I physically stood up and walked around during calls.   I got weird looks.   I ignored the fact that the entire remainder of the French team were native French speakers.  I pushed, and pushed and pushed.  It was a risky, aggressive approach because it drew a lot of attention and would be hilarious to others if it failed. The French team started joking about my approach and the overly casual French I was using to “close” and get leads.  I kept going.

As I pushed aside the fear of failure and stopped thinking about the absurd risks involved in trying to sell in a foreign language, the results started coming in.  First it was one or two leads here and there.  Then they came in more steadily.  Somehow my non-native French turned out to be a plus because the execs thought I was more of a technical expert calling from the US and not just another telemarketer.   Every time a lead came in, I would come over and tell my supervisor.  The leads would go up on a white board in a tally format.  I kept calling, the tally marks kept going up.  Toward the 2-month mark I was outselling the rest of the French team combined.  I won telemarketer of the month and finished the summer off on a high.

Risks, it turned out, were a lot less scary if you plunged into them.  I try to think back to that summer when I face big challenges. I remind myself to push fear aside and take action.

4 thoughts on “Risks Are Less Scary Once You Take Them”