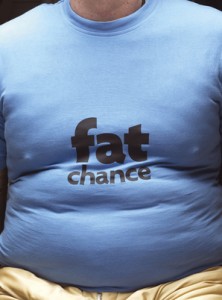 “Would you give the fat guy next to you the same deference as the tall guy behind you? Why or why not?”  Slate asked the question after the Twitter/media storm surrounding director/actor Kevin Smith’s February 13, 2010 ejection from a Southwest flight for being too fat.

“Dear @SouthwestAir – I know I’m fat, but was Captain Leysath really justified in throwing me off a flight for which I was already seated?” Smith tweeted.  As he landed in Burbank, after being seated on another flight, Smith followed up with “Hey @SouthwestAir! I’ve landed in Burbank. Don’t worry: wall of the plane was opened & I was airlifted out while Richard Simmons supervised.”.

And Smith did not stop there.  “Go F**k Yourself , Southwest Airlines” was the title of his SMODCAST (116) in which he blasted the airline for being the “Greyhound of the Air” and swore he would never fly with them again.  Wikipedia claims that Smith pummeled Southwest with 24 further YouTube videos about the event.

Southwest apologized to Smith and responded on its blog in a post titled Not so Silent Bob, citing the comfort of other passengers and the priority of a “timely (emergency) exit from the aircraft” as priorities that led to their actions.  Smith’s Twitter followers were divided in their response to his anger.  Of course, Smith had sympathizers.   But Slate did a good job of compiling the comments of some of his followers that felt Southwest was justified in its actions and that Smith’s tubbiness was the actual problem:

1. “sitting next to someone bulging into my seat for 6 hours is agonizing”
2. “unfortunately each ticket is allocated a weight.”
3. “access 2 every option for weight loss yet u don’t take advantage. why?”
4. “You’re big, you’re rich, pay for the 2nd seat and stop griping.”
5. “why weren’t you first class(?)“

These replies may be appropriate for Twitter but the PR nightmare that hit Southwest from Smith’s new media-savvy fury was enough to remind any company that anything that even vaguely resembles discrimination against obese people has huge firestorm potential.  The anti-PC crowd will jump on this as another example of what they see as the gutless tendency of mainstream culture to label issues as taboo and therefore necessitating extreme tiptoeing and denial.  But then this is the same crowd of buffoons that blasts gays, thinks racial humor is funny and speak nostalgically of a time when shooting your mouth off was the norm.  “Eat less” would be their advice to the Smiths of the world.  “Talk less” seems to be society’s reply to them.

So how do you appropriately treat the issue of obesity in American culture? On the one hand we push fad diets and the lean ideal, and on the other, our lifestyle (left unchecked) leads straight to plus-sized waist lines.  If you attempt systemic change through education, you could end up like Michelle Obama, who, in her campaign against childhood obesity, was heavily critiqued for speaking of her concern for her own children’s body mass index (BMI) woes. Denial won’t work either: It will only ensure that our next 50 years look like the previous half-century of fast-food-fueled fatness.  It seems innovation and some risk-taking could help.  For all their faults, Americans have an impressive ability to rise to the occasion and rethink life.  This could come in useful.  Until then, lift your armrest for Kevin Smith.