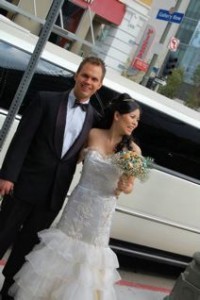 About a year after finishing college in the US, I was working in the Los Angeles area and my US work papers expired.  I was stuck because my new visa had not arrived and a 60-day countdown began at the end of which I would have to leave the country or lose my legal immigration status.

I remember sharing the dilemma with my Rotary Club at one of our weekly meetings.  I could not believe what happened next.  I literally got an offer from one of the members: “My daughter and I cooperate on many different levels, we’ll work out a marriage between the two of you if need be,” said the Rotary member.  I stammered a “thank you” to the offer and immediately started plotting how to politely tell her I’d rather go back to Europe than marry her daughter for papers.  Luckily, by day 51 I had my papers and I was able to dodge the awkward follow-up conversations.

Fast forward to now.  I married my wife Jammie about three months ago.  She loves giving me crap about the fact that I am still on a visa as a Swede living in the United States.  She is an American citizen of Filipino decent so she keeps asking me “Why do I look like I am the one that needs the green card?”  The line always gets a laugh because of the apparent role reversal.  Ever since I stepped foot on US soil for college more than a decade ago, the issue of the “green card marriage” or marriage of convenience has been joked about and for the longest time I swore that I would not marry an American for exactly that reason.  I never wanted to be suspected of getting hitched for papers.

Neither did I want to marry someone else that just wanted my papers.  Although not quite their American counterpart, European Union passports are also highly sought-after, as is the mere opportunity to work within the EU.  So I was always on the lookout while traveling to look out for any ulterior motives in potential romances.

What is the best litmus test when you are trying sort real love from immigration desperation?  I’d love to have your ideas.  Leave a comment or contact me @culturemutt on Twitter.  My next post will have some of my ideas for red flags that you should look out for when contemplating international relationships.

4 thoughts on ““Nice Green Card” – The Marriage of Convenience”