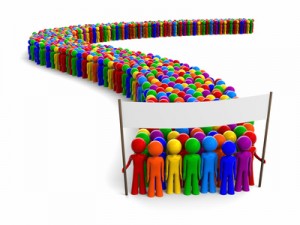 It comes right on the heels of Obama’s hospital visitation memorandum yesterday that banned hospitals that receive federal funding from denying visitation privileges to gay and lesbian partners.  Today marked the annual national Day of Silence, organized by The Gay, Lesbian and Straight Education Network.   Students across the nation were encouraged to remain mute during class to protest the bullying of gay students.   The day is wildly popular and, according to Yahoo News, “has become the largest student-led action addressing school safety for all students, regardless of gender, sexual orientation or race.” Obviously, opponents of gay rights have found something to fear in this fight for civil rights and equality.  Socially conservative family values organizations are convinced that Obama’s memorandum and the growing support for events like the Day of Silence are shaping up to cause societal damage of Icelandic volcanic magnitude

“I think that we shouldn’t be exploiting public education for this,” says Illinois Family Institute’s Laurie Higgins about the Day of Silence, “There are better ways to use taxpayer money. We send our kids there to learn the subject matter, not … to be unwillingly exposed to political protest during instructional time.”  For dinosaurs like this, America’s defenses against the gay hordes are disappearing faster than Horatio Sanz’s waistline.  Rhetoric critiquing an anti-bullying protest as political protest in schools is particularly ironic coming from an organization that deliberately works to influence curricula and, on its Web site, warns that “there is no scientific evidence that anyone is born gay or transgendered. Therefore, the (American College of Pediatricians (ACP)) College further advises that schools should not teach or imply to students that homosexual attraction is innate, always life-long and unchangeable. Research has shown that therapy to restore heterosexual attraction can be effective for many people.”

Some conservative groups are encouraging boycotting schools on the Day of Silence.  “Most schools get reimbursed on the basis of average daily attendance. In other words, they don’t get taxpayer dollars for teaching students anything — they get taxpayer dollars for having fannies in the seats,” said Bryan Fischer of the American Family Association. “So if you have fewer fannies in the seats that’s less dollars for school administrators and that’s an incentive for them to do the right thing here.”

As strong as opinions are on the right regarding gay rights and how best to restrict them, the left is both irate and fragmented about the perceived lack of progress on this civil rights issue. Obama’s tax day memorandum is seen as long-overdue to the LGBT community that supported him in the 2008 election.  Yes, he insisted that he would repeal “Don’t Ask Don’t Tell” and yes, “our gay brothers and sisters” got frequent mentions in his campaign speeches, but not much of substance had happened before yesterday’s memorandum.  And the gay community is divided on how significant the memorandum really was.

Leading gay news site, The Advocate, has comments across the board in reaction to the memorandum news.  Mike from Chicago says, “So we can die together but we cannot live together? This is not equality. It’s crap-and Obama’s full of it.”  CJ from LA says, “This is BIG. So, before we inevitably start complaining that this isn’t marriage equality or a repeal of DADT, let’s take a moment to appreciate the fact that this will have a very real, very large, and very personal positive impact on the lives of many members of our community.”

In today’s society, discrimination against the LGBT community as though it were composed of registered sex offenders, is ridiculous and simply offensive to basic common sense.  Conservative jabbering about homosexuality being forced on the young is bankrupt.  If anything the reverse is opposite and homophobic tendencies in society force denial and deceit on upcoming generations in their sexual journeys.  This is the generation and this is the president that is enlightened enough to make society more compassionate and honest.  Good policy, as it pertains to issues of sexual orientation, does not have to be so straight and so narrow.