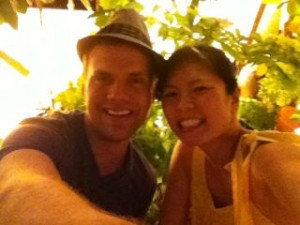 I got married three months ago on April 3 and at 2 AM, the morning after we got married, my wife Jammie and I took off from Los Angeles for our honeymoon in the Dominican Republic.  With a stop over in Panama City, total travel time took a good half-day and we arrived in the Dominican capital, Santo Domingo mid afternoon.

On top of the traffic, heat and noise of a new city, I had a little injury to deal with – namely my left pinkie.  I had slammed it in a car door just hours before leaving LA and it was swelling to twice its size.  Not a great way to start a honeymoon.

By the second night in Santo Domingo I couldn’t take it anymore.  The pressure on the finger was too much.  So at 1 AM, Jammie and I caught a taxi out to the best hospital we could find.  According to our Lonely Planet Dominican Republic & Haiti guidebook, Clínica Abreu was the “widely regarded as the best hospital in the city, this is where members of many of the embassies go.”  That was all I needed to hear.

I quickly learned that the embassy staffers probably don’t roll in at 1:00 AM though.  I ended up paying about $30 for a fairly junior, resident-like ED doc to inject my rear with a muscle relaxant (Jammie, of course, thought this was well worth the cash) and tell me I’d have to come back and see a surgeon the next day.  We headed out into an even darker Dominican night.  Not stepping out of a major hotel meant that we now could not find a taxi.  We fended off an offer for a ride from someone that seemed to be masquerading as a taxi driver (the car just looked too shady) and then got directions from a helpful hooker (I am not kidding, she solicited our car later) who knew the streets and where to get a more legit cab.  We got back to the hotel in one piece.  My finger hurt more than ever.

The next day we headed back to Clínica Abreu and the pain was unbearable.  We almost got turned away again over not coming during a certain surgeon’s opening hours but after stating my case in the most pitiable manner possible, we got in to see the physician who drilled through the nail on my pinkie and drained a gross but impressively large pool of blood from the finger, relieving most of the pressure.

Most of the rest of the honeymoon went smoothly. We stayed at three different hotels over our six days in the Dominican Republic.  We did a couple of days at an all-inclusive resort in a seaside town called Juan Dolio.  That was fun but two days was enough on a self-contained resort that was starting to feel a little claustrophobic and routine.  The rest of the time that we spent discovering Santo Domingo.

If you are planning trip to Santo Domingo, definitely check out Zona Colonial (exactly what it sounds like) which has all the old Spanish charm you need.  It also claims to have the first hospital, cathedral, monastery and university in the “New World”.  For a decently pricey yet memorable romantic meal, check out La Bricola (where the above pic was taken) – it faces the aforementioned cathedral,  is housed in a restored fort-like structure from the 1600s and serves – here’s the slightly inauthentic downside – Italian cusine.  Also, for ice cream stops, you can’t beat Helados Bon, an ice cream chain that would be competitive stateside.

As for transportation there and back, Copa airlines seems to have the best deals.  Expect roughly American prices for everyday expenses.  And fully expect to haggle about taxi prices and market purchases.  You will likely still get ripped off but resist their first price and use your guide book to get the basic price for necessities.  Priceline will get you decent hotel deals.  The all-inclusive resorts are worth some research ahead of time.  The major guide books can guide you to whatever you are looking for – college party through to family settings.

I won’t go back in a hurry as I think we hit most of the Santo Domingo tourist spots and I’m not into vegging at all-inclusive resorts but I would definitely recommend the Dominican Republic if you haven’t been yet.  It’s a great tropical escape.  Just avoid slamming your fingers in doors.

5 thoughts on “My Dominican Honeymoon (and a 1:00 AM Emergency Room Incident)”