Long distance romances are often seen as totally doomed.  Time zones, poor communication, lack of physical presence, work distractions, competing local contenders, long distance lovers’ squabbles, dropped Skype calls, bleak future possibilities – the list of obstacles is as long as it is real – it can be a killer for even the most devoted of love birds.  So it was with a heavy heart and quite a lot of angst that I navigated the U-Haul truck down Hollywood Boulevard.  I was about to leave behind the city I called home, my Los Angeles circle of friends and Jammie, my girlfriend of two months.  Right before leaving Los Angeles I had a conversation with a mentor, the CEO of a local hospital.  I told him that Jammie and I were going to do the long-distance thing.  His reaction?  “I give it three months.”

Well, almost three years have now passed since I moved up to the greenery of Northern California and not only did Jammie and I make it but we are now extremely happily married.  As the average CultureMutt reader is of the well-traveled variety, I thought a piece on making long-distance relationships work might be in order.

We’ll take in two steps.  This first post will be about challenges and post #2 will handle how to tackle said challenges.  So here we go – here’s what really sucks about long distance romances:

1)  Out of Sight, Out of Mind – Not only did I move to Northern California, a few months later, Jammie moved to Seoul, South Korea for 6 months.  The natural course of development would have been to gradually forget about the other person.  Without a lot of communication, it would have been easy to simply let the distance take over and gradually let the lack of a physical presence mean the lack of a mental and emotional one.

2)  Phone Conversations and Emails are Ripe with Opportunities for Misunderstanding – Ever receive a text that you had NO idea how to interpret?  Or an email that seems a little curt?  Wish emoticons could be banned?  Not sure how to interpret your boyfriend’s tone on the other end of the line? (is he tired of bored?… does he just not care about me anymore?)  Even with video conferencing, communication IS compromised when you are not in person.  Communication breaks down all the time in person, what are you supposed to do if you are getting yelled at from across the world?  A challenge for sure…

3)  Long Distance Relationships Cannot Continue Indefinitely – Some kind of an end needs to be in sight for most long distance relationship to have a prayer of surviving.  I mentioned that Jammie and I had only been together for two months when I moved from LA.  It was a little earlier to start hunting for wedding locations.  Instead we were faced with the challenge of nurturing a relationship long distance that was brand new and had no predictable reunion to it.

4)  Distractions - Whether it it be other people, work or the demands of a busy schedule, relationships die from distractions.  If long distance compounds an already messy relationship that is suffering from one or more distracted parties, the future can look rough.  It takes extraordinary focus to overcome these distractions.  Life is incredibly messy and if one of you is traveling, the very reality of being abroad is a HUGE distraction.  One of the beauties of traveling is that you redefine reality with every step.  This can help or hurt a relationship… it is easy to get caught up in a new reality and forget an important part of what really makes you happy.

5)  Are you Really Dating? - A friend of mine who dated long distance for years got some fairly direct advice from a married friend.  “You and your “girlfriend” aren’t dating… this long distance stuff doesn’t count.”  Agree or disagree, there is some truth to this.  If the main reason your relationship is working is the fact that you don’t actually have to physically interact, then it is very possible that your long distance relationship is a touching but misguided creation that may well turn out to be a disaster as soon life serves up a physical reunion and you have to deal with day-to-day contact.

If you feel that the above list hits too close to home, don’t give up.  You don’t necessarily need to throw in the towel.  There is hope.  Part of the solution is in articulating and understanding the problem.  But there is more to making long distance relationships work.  In my next post I’ll tackle some of worked for Jammie and I. 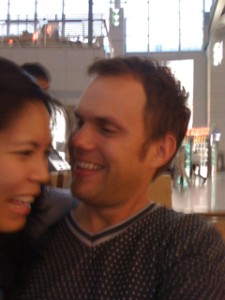 12 thoughts on “Long Distance Love I”