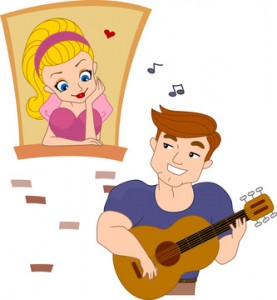 It hadn’t even been a week.  I had just started college in the United States and here I was, singing backup with a mostly Latino group as my friend serenaded a girl who seemed very happily surprised by the gesture.  I didn’t speak a lick of Spanish at the time so I didn’t have a clue what I was singing, I just copied everyone else.  It went beautifully.  The girl smiled, my buddy did a good job with his solo and everyone felt good to have started the school year on such a positive, if slightly melodramatic note.  I had never serenaded or even back-up serenaded anyone so this was a big intercultural step for me.  It was totally new to me but as most of my new friends were Hispanic, I was eager to learn and fit in. Sadly, it was also the last successful serenade that I remember my friends and I pulling off in college.  Here’s how we botched the rest:

One of the top rules of serenading has got to be KNOW YOUR MATERIAL.  And yet, partly because most of the songs were in Spanish, some of our group (and especially yours truly), had issues remembering words.  We would practice the song or songs a few times but clearly not enough.  After surprising a girl and drawing a lot of attention, we would start off confidently.  But somehow, even accompanied by friends on the guitar and trumpet, we would mess up the lyrics and our grand gesture ended up looking endearingly goofy at best.

Drawing Abuse from Everyone

Our theory was that serenading had to happen at night.  So we would wait until most people were in bed before making our way over to the relevant residency hall and assembling underneath the right window.  As soon as everyone was huddled, the guy who sang the solo (and this was definitely never me), would step forward and we would start.  Between the trumpet, guitar and mediocre singing, the girl would wake up, come to the window and watch the show.  The problem was that everyone else also woke up and came to their windows.  The unamused, awakened masses would then start yelling at us to shut up and go home.  This kind of took away from the romance.

Not Staying up Late Enough

Regardless of the reaction from the angry hordes, those in the know judged the success of a serenade partly based on how late the guys had waited up to do it.  Once some friends of mine thought they were too tired to stay up and instead went and sang to one of our friends for her birthday at 11 PM.  This backfired royally.  I had luckily escaped being part of this one but I was in the room when they got the call from the girl who blasted them for not showing more effort and staying up later to serenade her.

Probably the most high-pressure serenade I heard about in college involved my friend who really could not sing, serenading his girlfriend of just a few weeks.  He was nervous but decided it had to be done.  As he started to belt out his song his backup crew did the unthinkable – they started a competing song with the most mocking lyrics possible to put him off.  I have no idea how he made it through alive.  He even yelled out something about her being the “best girlfriend in the world” at the end.  I hope she was touched.  It was a disaster.

Luckily a serenade was not on the list of requirements my Southern Californian wife had for a husband.  I shudder to think of how things would have gone had she asked for one.  Have you ever serenaded someone or been serenaded yourself?  Tell me about it in the comments…

3 thoughts on “How Not to Serenade Someone”