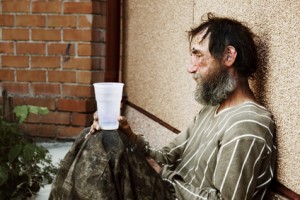 I don’t believe in being driven by guilt.  Yet so often I am. The question of how much of my income I should be giving to charity makes me feel uncomfortable. I often feel like I should somehow be giving more. That what I am doing is not enough.

I work in hospital fundraising so I understand how the fundraising machine works.  The charity identifies a pressing need and decides how best to get the word out to potential donors.  They use the most powerful images and stories available to convey the need.  They send the right people to talk to you.  If they can tug at your heartstrings, they will.  It is a science.

I don’t say the above to make any of us cynical.  Any worthy cause needs to be persuasively presented.  If you cannot engage the emotions of your donor base, its “game over” in fundraising.  People don’t give from the head, they give from the heart.

But even if I understand the mechanics and persuasion behind major fundraising, I am still stuck with the dilemma of deciding just how much to give to each cause.  I tend to be a big supporter of one or two causes and then to give token gifts to everything else.  Is this living generously?  Is this being a savvy do-gooder?

Some look to the traditional tithing system in churches as their saving grace –  10% of their income goes to one religious entity and, voilà, they are all done.  I’m not saying 10% is bad… it’s a lot more than most people do.  But it doesn’t answer my questions about how discerning giving should work.  Should you go for the extremes?  There are the next level giving types that practically (or literally) take vows of poverty and then there are those that give to causes as though they were fashion statements.

I’ve gone through phases where I have felt guilty for spending money on some of life’s luxuries that I enjoy and there have been other times when I have barely cared at all.  What I am more and more convinced of is that it is possible to live a generous life either as a rich or as a poor person.  Being wealthy does not make you greedy just as being poor does not make you unselfish. Surely it is the mentality that you have towards others, towards giving, that matters in each case.  Is the intent positive?  Have your researched the cause?  Is your gift generous without being financially reckless?  How do you feel having given?

4 thoughts on “How much should you give to charity?”