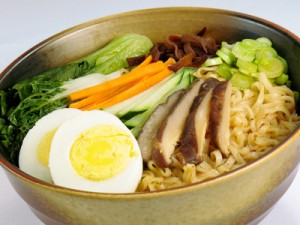 Korean fusion is taking over.  Get used to it.

Voted “Hottest Cuisine of the Year” by the January 2010 edition of GQ, Korean eateries have been making inroads all over the United States in the last few years.  Gone are the days when unadventurous bores got away with dismissive comments and wrinkled noses at the suggestion of Korean for dinner.  Kimchi fusion just got sexy.  Ask the long lines of Angelenos that waited for a taste of kimchi-topped tacos from L.A.’s four KoGi taco trucks.  With over 51,000 Twitter followers, Kogi truck locations are tweeted to fans that then descend on them in hordes.

NPR quotes a devotee review on yelp.com:  “I tracked down Kogi Friday night… Life as I know it has ceased to exist. I want Korean BBQ tacos, I want them now and I want them every day for the rest of my life.”

Hop coasts and you’ll run into the Kimchi Bulgogi hot dog (a spicy dog with Korean-style barbecued beef and spicy kimchi), available from New York Hotdog and Coffee for $6.50.  Want a burger with a K-twist?  Burger House in Houston, a Korean burger joint, will fry you up a bulgogi burger for $4.95.  Korean Food Revolution., a post on iamkoream.com, talks about leading Korean American chefs “Korean-ifying” other mainstream dishes to positive effect.  The trend shows no sign of slowing down.

Of course, it doesn’t always work.  The Los Angeles branch of Korea’s Mr. Pizza Factory served up a flop with their “bulgeogi pizza, a slather of marinated beef, along with potatoes, bacon, sour cream and chives on top of a greasy pie.” (iamkoream.com)  Reviews were harsh.  You can’t win them all.