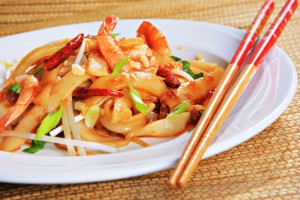 I was in Vegas for my bachelor party almost a year ago.  Before you start thinking that the whole thing was a blur of hedonism I would like to add that the prime organizer of the weekend was a pastor.  The wildest thing we did was sip chilled lemon water in a spa at the Venetian.  One of the most memorable things about the weekend came at the very end.

We decided to go a Thai restaurant that was drawing stratospheric ratings.  The first night we went there the wait was so long we gave up and decided to come back earlier the next day.  As soon as we got in the next day we scoured the menu and picked out what we thought would make for a great blend of dishes.  When asked what kind of spice level we wanted we all decided that we were being modest by saying “medium”.

What followed was a study in torture.  “Medium” turned out to be deceptively easy on the taste buds at first and then fired up to the point where we felt like our mouths were being torched.  Within minutes we were all sweating and realizing that all the hype and determination had been wasted because we were suffering and could not taste our food because our taste buds were fried.  Talk about a white boy moment.  This was particularly humbling for me since I was raised in Asia and am way overconfident about the amount of spice I can handle.  It was a drop kick.

A couple hours later I boarded my plane for Sacramento as a somewhat subdued nearly-wed.  My faux pas at the restaurant was a wake up call for me, someone who prided himself on strong navigation of cross-cultural scenarios.  Overconfidence, especially in navigating a new culture, can be humbling at best.  As I write this I think of other times I have screwed up in cross-cultural settings from being too confident:

1) I’ve assumed that I know how best to communicate a grievance and been perceived as being rude – Freshly back in the UK after living in the US for a couple years I lectured my boss’s executive assistant on correct media etiquette after she was less than cordial with a visiting American film crew.  She clammed up for 48 hours and then blasted me for stepping out of line.  “I’m sorry, I just got back from the US where people are a little more direct!” I stammered.  She told me that “it showed” and our relationship was off to a bumpy start.

2) I’ve definitely tried to say things in languages in which I don’t have a strong foundation – I don’t even want to start on how many times this has flopped.  There’s a thin line between being bold and adventurous with language learning and making a fool of yourself…

3) I have tried to fix problems and disagreements between friends from cultures other than my I own that I should have left alone.  (Filipino marital conflict mediation, anyone??)

My point isn’t that we should lose all the confidence that we have built up from travel and other intercultural experiences.  That would be a waste of life experience and a definite shame.  But confidence so easily leads to cockiness which can be particularly humiliating when it goes wrong. So show off your cross cultural savvy by knowing where to draw the line…