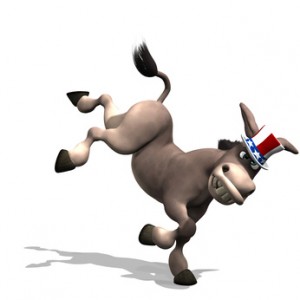 “He was wowed by Obama’s oratorical gifts and believed that the country was ready to embrace a black presidential candidate, especially one such as Obama — a ‘light-skinned’ African American ‘with no Negro dialect, unless he wanted to have one,’ as he said privately.”  Nice one Harry. The pre-release chatter surrounding 2008 campaign  journalists John Heilemann and Mark Halperin’s new book “Game Change”, has been focused squarely on Harry Reid’s comments.

The Senate Majority Leader is, of course, no stranger to gaffes. Politico.com published an anthology of them yesterday.  They would be on par with the Bushisms that we all miss were it not for the fact that Reid’s are even more offensive. Let’s review a few:

“This war is lost.” (April 2007) – This comment about the Iraq war would be harder to defend today with casualities at an all-time low and troops pulling out.

“I think it’s going to help us.” (August 2009) – Reid’s words of wisdom at the death of Ted Kennedy, spoken as a rallying cry to inspire Democrats to pass health care reform.

“You can always tell when it is summertime because you can smell the visitors. The visitors stand out in the high humidity, heat, and they sweat.” (December 2008) – His views on tourists in the American capitol.

(My favorite) “I think this guy is a loser” (May 2005) –  From one wordsmith to another – Reid’s views on George W. Bush.  What’s even better is how he defended this comment.  Politico says it best: “Reminded later that he’d called the president a ‘loser,’ Reid volunteered that he’d also called him ‘a liar.’ He also noted that he’d apologized for the first line — but not for the second.”

Reid has also apologized for his most recent comments to Obama (who immediately accepted) and a slew of civil rights leaders in a weekend-long effort to mitigate the damage of his words that have caused a veritable firestorm.  As troubling as Reid’s comments were, they only seem to fall in line with an embarrassing pile-up of anachronistic asides, perpetuated by other babyboomer Democratic big wigs.

“Game Change” also references Ted Kennedy’s fury after a conversation with Bill Clinton in which the former president lobbied him to endorse Hillary for president and then went on to deride Obama, saying, “A few years ago, this guy would have been getting us coffee.”

Let’s not forget Joe Biden’s perky observation that Obama was the “first mainstream African-American who is articulate and bright and clean and a nice-looking guy.”  This was his view at the start of the campaigning for the 2008 elections, when Biden himself was running for president.

Along with the expected campaign-trail blunders that plagued the paths of the presidential hopefuls ahead of the 2008 elections, check out Hillary’s condescending southern drawl to a mostly black crowd at Al Sharpton’s National Action Network convention.  It is painful.

But let’s not be overly harsh on the Democrats.  Quite apart from Bush’s decade-long monosyllabic babble and most of Sarah Palin’s gone-rogue platform, we’ve been treated to some real gems from current Republican National Committee Chairman, Michael Steele. The verbose RNC leader has been enthusiastically promoting his book lately and has been drawing attention to himself, declaring that he does not think the Republicans will take back control of the House in November.  Steele’s record on political correctness took a nose-dive when in a live Fox interview, he declared that “Our platform is one of the best political documents that’s been written in the last 25 years. Honest Injun on that.” He’s being criticized from every direction, especially by his own party leaders.  Quick-thinking Steele is never without a retort, though.  He told his Republican detractors to “Shut up,” and reminded them, “I’m the chairman. Deal with it.”

And there you have it, the one truly bipartisan position in Washington, DC: Who cares what the little people think when you are the one in power?