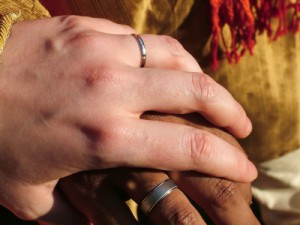 My dad and I were catching up with an old family friend and he was telling the story of how his then-future son-in-law asked for his daughter’s hand in marriage.  “He took me golfing and didn’t say a word about my daughter.  It was the biggest white elephant in the room ever.  We went the whole day without him saying anything at all relevant to the whole reason we were golfing.  Then as we pulled into my driveway at the end of the whole day,” our friend breaks into a huge smile, “he shows me he’s a good Southern boy and he says, “Jill and I were thinking about getting married.  Do you, uh… do you… I mean… do you think that would be a good idea?”

The awkward suitor was given the go ahead after his stumbling efforts and the incident got a permanent page in family history.  A success story.  But things obviously don’t always go that smoothly.  Most of my American friends probably know someone that dodged family expectations, lavish custom and the accompanying bills and eloped in Vegas.  Some enjoy the notoriety of having done it “my way” regardless of offended relatives and fat Elvis impersonators that will forever mar the $19.99 picture album of their union.

But most people who decide to tie the knot want to do it well.  This is no easy thing, especially if you and your second half are from different cultures.  I am not married so the following are not my tips but rather an assortment of the cross-cultural knot-tying advice I’ve picked up while on the trail:

1) Examine motives: Sorry to start off with something so boring.  It is vital though.  I will never forget the time I was in line for check-in at the Dominican Republic’s Santo Domingo airport.  In front of me was a very boring looking, potbellied, middle-aged white guy with a stunning local girl. I was about to roll my eyes when the woman reached into the old guy’s back pocket and pulled out a passport.  She proceeded to wave it to her friends who all started jumping in delight at the other end of the security barrier.  Joe may have bagged a beauty, but Juanita snagged a passport.  Avoid the marriage of convenience.  Enough said.

2)  If you are going local, don’t go “loco”. There’s nothing more pathetic than a wannabe.  Cultural sensitivity is great and is absolutely advised, but everyone can spot a desperate bluffer.  There is absolutely no reason that you should walk around in your future spouse’s national costume for days on end just so you can be accepted as “one of them”.  You are different, you are from somewhere else.  Own it.  It’s OK.

3)  Realize that you may never be “good enough”. As much as your future in-laws may like you, there is likely a little part of them that just wishes their son had married one of his own.  This is nothing personal.  Your attempts at Scandinavian midsummer frog dancing are commendable but you will never be mistaken for a Greta.  You will find that everyone, including yourself, harbors some kind of prejudice. Christine Benlafquih, in an article for suite101.com titled “Cross-Cultural Marriage”, makes the point that it helps to find out what some of the commonly held prejudices are in your significant other’s culture. This can prevent nasty surprises farther down the line. Innermost preferences and prejudices aside, your future family will most likely appreciate you and will eventually see you as a person before your nationality.

4)  Talk to others that have done it – Intercultural marriage is never problem free.  It is challenging.  Tamula Drumm, writing for TransitionsAbroad.com, states that although statistically intercultural and interracial marriages have a high rate of failure, many couples make them work. It helps to learn from the success stories of older couples that have had to deal with more cultural disapproval and discrimination but still were able to live happily together.  Ask questions, listen to their stories and learn from their mistakes.

In the end a cross-cultural marriage boils down to the same thing as any other marriage.  Where there is love and a will there is a way.  So relax, enjoy this special time of life and, if all hell breaks lose, there’s always Vegas.

6 thoughts on “Getting Hitched? Some International Guidelines…”