It is loud. It is passionate. It is unbeatable. Last Saturday night, Jammie and I headed to a Filipino karaoke party with some Filipino friends that teach English here in Bangkok. We loved it. For those wanting to understand Filipino culture, date a Filipina girl, get Filipino jokes or just have a great evening, hitting a Filipinio karaoke party is essential. Here are the basics:

Pretty much any Filipino party is a karaoke party

Whether or not the Filipino party you are about to visit is billed as a karaoke party, chances are that karaoke will be involved. Sure, there will be Filipino party games and all kinds of foods from the Philippines but if nobody busts out the magic mic (top notch, high tech karaoke gear), something is very wrong.

Expect the karaoke songs to start about half-way through the evening. If you arrive, at 7:00 PM, say, the karaoke will likely be starting around 9:00 and will be in full swing by 10:00. It probably won’t fizzle until past midnight once all the karaoke songs that everyone has suggested have at least been attempted.

Give it your all

There is no holding back in Filipino karaoke. As with anything at a Filipino party, you had better lose your inhibitions and give it your all. Don’t know any Tagalog karaoke songs? Well, they will have English ones. So if you want to impress that Filipina girl you’ve had your eye on, you had better rock that magic mic. Understand, you do not need to be good in the traditional sense. You just have to be passionate.

No standing on the sidelines

And don’t think that you only have to get passionate if you yourself are taking part in the karaoke singing (as in holding one of the mics). If you try to avoid the action at a Filipino party, chances are that you will be outed with brutal efficiency and recruited into bellowing out “We are the Champions” à la the clip above.

They start you young 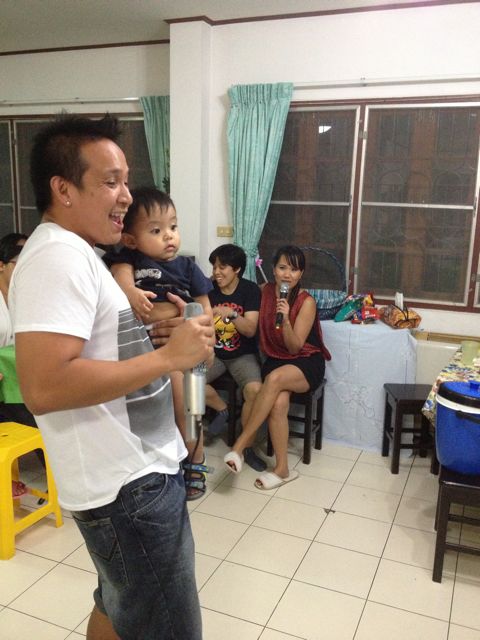 See the little boy being held up to the magic mic?  That’s called grooming.  Training in karaoke starts when you are young.  Filipino parties are always teeming with kids.  That’s part of the experience.  Filipino party games are often designed specifically for kids so they are an expected part of the experience.  And because they start so young, Filipinos are absolute naturals at karaoke.

Even old white guys can join

This is often my favorite part.  Even old white guys are handed the magic mic at Filipino parties.  The guy in the vid above (married to a Filipina woman) did super well.  The magic mic software has a grading system and he scored 99 out of a 100.  We were all very impressed.  He was singing “Hey Jude”:)