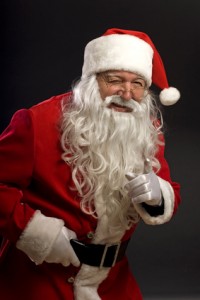 Christmas has come and gone.  As the festive fuzzies are replaced by a cold, bleak and broke January, consider the following about Santa to help you get over Christmas:

Santa is crude and scary

Recruiting firm Westaff encouraged its 2007 Santa trainees in Sydney to replace their traditional greeting of  “ho ho ho” with a blander “ha ha ha” because the former could scare kids and, as Australia’s The Daily Telegraph put it, “One would-be Santa has told The Daily Telegraph he was taught not to use “ho, ho, ho” because it was too close to the American slang for prostitute.”

Santa is way too fat and, as such, is a bad example for kids. Acting US Surgeon General Steven K. Gallson said in 2007 that Santa should lose his body fat, start eating carrots instead of cookies and wear a helmet when conducting activities on the roofs and in chimneys.

Now that we have swine flu to further spread Christmas cheer, Australian academic Dr. Nathan Grills says in the Chicago Tribune: ‘“Unsuspecting little Johnny gets to sit on Santa’s lap, but as well as his present he gets H1N1 influenza… Santa continues on his merry way and gives the ‘present’ to a few more 100 kids before coming down with influenza himself.”‘

Santa is a pervert

What is it about Christmas that makes it OK for strange old men in musty costumes to sit around with unsuspecting minors in their laps for days on end at the mall?  Remove the context of Christmas and it is downright disturbing to consider placing children in the lap of a tubby stranger who is said to “see you when you’re sleeping” and “knows when you’re awake”, who makes out with mommy and has a thing for a reindeer with a shiny nose.

Santa is a hell of a taskmaster.  His poor elves pull brutal shifts as they scurry around making toys and loading sleds for all the children of the world.  What do they get for this herculean feat?  Christmas cookies.  Not cool.

18 thoughts on “Fat, obscene and pervy… your post-Christmas guide to Santa”