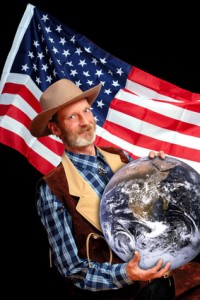 In most of the countries I’ve lived in (including the United States), there is always a group of people that is hellbent on some quality America-bashing.  America’s global policing, its economic bullying, it’s worldwide export of popculture, George W. Bush – the list seems endless when it comes to beef with the United States.  Before living in the US, I would gladly participate in these bashing sessions.  It just felt right somehow –  a way to get back at the country equivalent of the chubby playground bully with too many toys.

After moving to the the United States for college, my views started to change.  Part of it was having American friends.  Instead of seeing America as summed up in the ideology of a certain political leader, I saw real people.  While l thought of Bush’s post 9/11 foreign policy in the Middle East as sheer lunacy, I was able to separate my thoughts on this very polarizing leader from the many conversations that I had enjoyed with American friends of mine that seemed very balanced in their views regarding America and its place in the world.

As I began to identify myself more and more closely with the United States, a sense of loyalty to my adopted country emerged and I caught myself defending the United States abroad.  When fellow Europeans would point out the death penalty and the huge economic disparities in America as evidence that the United States was a backward playground for cowboys, I would counter with the fact that huge parts of the American population are very vocal in their opposition to these very same things.

In a May 13, 2007 article from The Washington Post titled “4 Myths About America-Bashing in Europe”, William Drozdiak talks about what he calls the “love-hate melange” between Europe and the United States.  He asks: “Why has U.S. stature in the world eroded?  Opinion polls cite widespread dismay with the Iraq war, our dog-eat-dog social model and the arrogance of an imperial superpower that places itself above international law.”  Despite all this, Drozdiak claims that there is a “reservoir of goodwill waiting to be tapped among foreigners who would prefer to see the United States succeed rather than fail.”

He makes the point that European political leaders are actually fairly pro-American.  France’s Sarkozy is very supportive of the United States.  Angela Merkel in Germany has made a number of high-profile visits to America. Former UK Prime Minister Tony Blair and the current PM Gordon Brown are both good friends of the US.  Also, especially young Europeans seem to want to study and work in the US.

As for social models, Europe is learning the pitfalls of running welfare states and is looking to the United States for ideas on possible reforms.  Of course, American popculture is all the rage.  Finally, Europe is not limited to liking only American Democrats.  Although most hated George W. Bush, nobody wants flimsiness in foreign policy à la Clinton’s early 90s policy that allowed the Balkan attrocities to take place more or less unchecked.

Since Drozdiak’s 2007 article and despite the ongoing strife in the Middle East, Barack Obama’s outreach to this part of the world does not go unnoticed in Europe.  Obama’s diplomatic overtures won him the Nobel Peace Prize.  The dramatic facelift he has given the United States in terms of international diplomacy and goodwill has made this one of the easiest times to travel as an American in Europe for decades.  So there’s hope for a warming of relations in the next decade.  Especially if baby boomer American tourists leave their ghastly white sneakers stateside when they hop the pond.

4 thoughts on “European America Bashing Going Out of Vogue?”