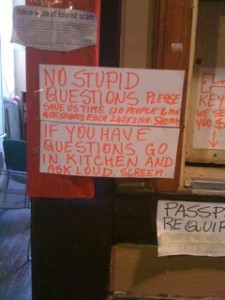 Meet a really unique blogger that I’ve been lucky enough to correspond with lately:

Ryan Holiday – I first stumbled across him through Tim Ferriss’s blog Experiments in Lifestyle Design.  The guy is super interesting.  He is 24, was the Marketing Director for American Apparel but left his position and is currently at work writing a book in New Orleans and, in his own words “I’m trying to stay holed up in libraries and dark rooms so I can get this thing finished … I’m in the Garden District.”

What is interesting to me about Ryan Holiday is the level of success that he has been exposed to as a guy in his early 20’s: “I’ve seen my work written about in every major publication I can think of. I’ve been offered two book opportunities and turned them down. I ran one of the biggest and earlier Groupon deals. I’ve traveled. Met with important people. Been humiliated and learned from mistakes. Had power, used power, observed powered. And at the end of it, all I could think was: so…”

Who Wants to be a Millionaire?

He’s not particularly interested in money:  “Anyway, here I am at 24. Not close to the millionaire I naively promised myself years ago I’d be by the time I was 25. But I do have more than I know what to do with. And thanks to Philosophy I can’t see myself realistically chasing that goal very hard anymore. Because when you figure out what is important to you in life, you can throw out all the rest. You can stop chasing ghost and shadows and illusions. You can lean on what is real and what is necessary. And you can laugh and pity those can’t. You can realize, as Seneca wrote, that too often they ‘win’ at the cost of life.”

I wanted to know more about this really anti-materialistic bent so I left a comment:  ” I am intrigued by your love of philosophy and your very obvious determination to regain control of life by “dropping out”, trimming down and focusing on the very core of what is meaningful to you. Do you think that this core that you can “lean on” , the “real” and the “necessary” is found within you or in something else… a transcendent element of some kind. I don’t necessarily have a fixed answer and I resist the pat replies to this kind of questioning.”

He wrote me back:  “I think it’s both. It’s reducing things to their essence–that which is real. And within yourself, focusing on what you can control (say, your attitude about events rather than the events themselves) and worrying only about that.”

Ryan doesn’t seem to parade as someone he is not.  I got really interested in his most recent post on pain and so wrote a very wordy comment.  His reply?  “Those kind of questions are best left to people much smarter and better with language than I.”  I like this guy.

I’ve subscribed to updates on his reading list and I know he is a big fan of the Stoic philosophers, especially Seneca.  So I wrote him less than an hour ago: “I’m about to head to Barnes & Noble to buy something good (don’t know what yet) on or by Seneca. What should I start with?”

“On the Shortness of Life is good (but very short). Penguin’s Letters from a Stoic is what I started with.”  Cool… maybe future future CultureMutt posts will have more of a stoic flavor to them… I’ll keep you updated.

One thought on ““Do I Make Enough Money?” and Other Questions Ryan Holiday Could Care Less About”